Still shaken by the terrible events of May (as recounted in ‘The Edge of Darkness’), Prof. Nigel Blackthorne visits his friend Dr. Pierre Rioux’s home on Palmerstone Avenue (Toronto) for some food and drinks.  After dinner, as dusk turns into night, they spy Pierre’s neighbour, Mr. Corbitt, returning home with two large sacks.  Out of one sack falls an object that Pierre believes to be a limp human arm!

Alarmed, but without sufficient grounds to involve the police, the two friends spend several days trying to learn more about the enigmatic Mr. Corbitt.  They learn that Corbitt’s father died while on a trip to India with him fourteen years ago.  Moreover, his wife had died in childbirth, along with his son, a dozen years ago.  They also learn that Corbitt is an importer of exotic goods from the far reaches of the globe, and in particular South and East Asia.

Eventually, Pierre meets with Corbitt at his house, pretending to be interested in employing Corbitt’s services in order to import certain exotic artifacts from the Orient.  While Pierre distracts Corbitt, Nigel investigates the greenhouse at the back of the property, wherein he discovers plants with vile toxins, and, quite shockingly, an entirely alien plant!  Nigel also absconds with a vial containing a strange compound, which later is identified as ‘soma,’ a substance used by Indian cultists.

Fortunately for the investigators, Corbitt leaves Toronto for several days on business.  Becoming increasingly frightened, the two friends purchase gas masks and handguns.  Pierre and Nigel then break into Corbitt’s greenhouse.  Protected against the spores from the alien plant by their gas masks, they collect various samples.

The investigators then enter the house itself.  Therein they discover Corbitt’s journal, which describes his terrible investigations into forbidden knowledge and black sorcery. It seems that the businessman had become a follower of an Indian demon named ‘Ramasekva,’ which forced Corbitt to allow it to impregnate his wife.  One of the demon’s ‘sons’ lives to this day!

They subsequently kill one of Corbitt’s horrible ‘experiments,’ as well as the terrifying ‘son’ of Ramasekva, referred to by Corbitt in his journal as the ‘Man-Bagari.’  To the creature’s spherical, pustular body had been appended the pale, quivering limbs of numerous slain children.  Disgusted, and with their sanity somewhat shaken, the two friends flee the house. 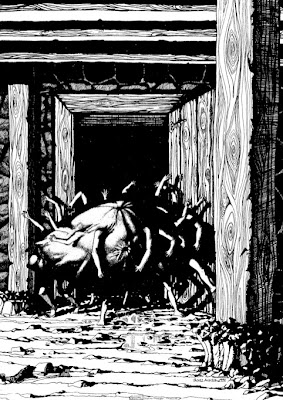 Mr. Cobitt returns two days later.  Upon discovering his slain ‘child,’ he sets his house on fire and kills himself with a shotgun.  All evidence of his foul activities blessedly is destroyed by the subsequent conflagration.

Finally, Pierre and Nigel study the text of eldritch lore that they had acquired during their exploration of Corbitt’s house – the blasphemous grimoire True Magick by Theophilus Wenn – from which they learn certain terrible things…