I made it to OSR Con II last Saturday.

In the morning I played in Lawrence Whitaker’s RuneQuest 6 game.  It was great to have Lawrence as a GM again, an experience I haven’t had the opportunity to enjoy since the conclusion of our Young Kingdoms campaign almost a year ago.  (Also at the session was Ken St. Andre, creator of Tunnels & Trolls and co-author of the original Stormbringer RPG.) 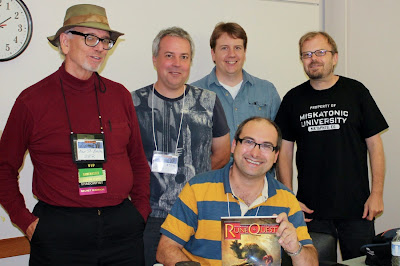 After the game and a quick lunch, there was a panel discussion with such RPG luminaries as Ed Greenwood, Ken St. Andre, Lawrence Whitaker, and James Maliszewski (who has posted his own report of OSR Con II).  The discussion was enjoyable and interesting, but went on a bit long, eating into the time that had been allocated for the afternoon’s sessions. 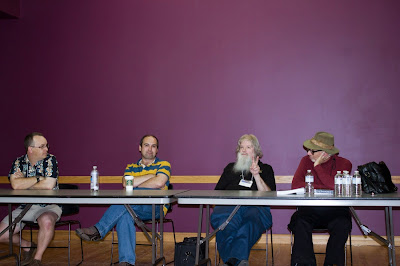 During the afternoon (and into the early evening) I ran a Call of Cthulhu game.  There were five players (including Lawrence, and fellow Call of Cthulhu enthusiast Marcus, a.k.a. ‘Nigel Blackthorne’), which is about my limit for a CoC game.  I ran the scenario ‘Ghost Light’ from Chaosium’s fine Terrors from Beyond book.  While I had hoped to prep an original scenario, limited time prevented me from doing so.  In any case, I picked ‘Ghost Light’ because it was nicely suited to a convention (‘one-shot’) game, and it worked out quite well, I think (well, except for the character who was turned into a puddle of fetid black goo!). 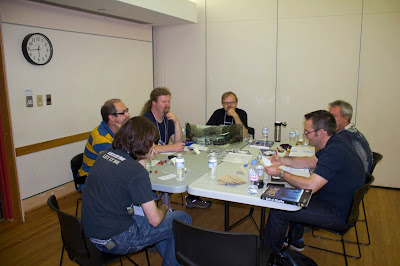 [Marcus explains how his character responds to the eldritch horror.]

Kudos to the organizer of OSR Con II, Chris Cunnington, for doing such a great job!  There are some pictures of the con at Chris’s blog here. Kiltedyaksman also has a report at his Discourse and Dragons blog.

I very much hope to attend again next year!

(The above pictures shamelessly stolen from here.)