As OSR Con II was winding down last month, the artist Ian Baggley introduced himself to me and said a few nice things about this blog, which I quite appreciated.

I think very highly of Ian’s art, and have posted some examples of it a few of times before.  This picture of an Elder Thing strikes me as especially superb, worthy of its eldritch subject matter: 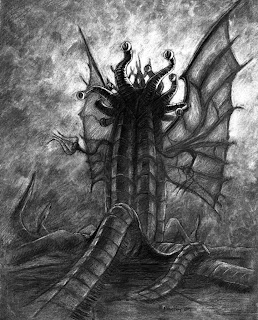 (I would be delighted if some pictures like the one above by Ian were to make it into the forthcoming 7th edition of Call of Cthulhu.  He has a real talent for portraying the weirdness of H. P. Lovecraft’s and Clark Ashton Smith’s weird creations.)

Anyhow, my brief encounter with Ian reminded me that Astonishing Swordsmen and Sorcerers of Hyperborea is now available.  I must confess that I lost track of what was happening with Jeffrey Talanian’s intriguing game about a year ago.  But it finally has appeared, and, following a quick skim of the PDF, it looks superb.

Since I already have (and contributed to) Crypts and Things, which covers the same genre but is much lighter on the rules, I doubt that I’ll ever actually run the ASSH system (but hey, I’ve been known to change my mind!).   Nonetheless, there are many things I can envision borrowing for future games.

What most impresses me, based on my quick skim, things I’ve read before (including the ASSH adventure ‘The Charnel Crypt of the Sightless Serpent’), is the setting.  While the setting is not Smith’s ‘Hyperborea’, it clearly is inspired by Smith’s work (in fact, it reminds me more of Zothique than Hyperboria), as well as that of other legendary pulp authors, such as Lovecraft and Robert Howard.  It’s a great setting, and would fit in quite nicely in, say, the cosmology of Michael Moorcock’s ‘Million Spheres’, or perhaps a hitherto unknown part of Lovecraft’s ‘Dreamlands’.

One gripe that I have, though, is the map, which is certain to eat up way too much ink if printed.  I wish that an ‘ink friendly’ version had been included.

If you are interested in checking out Talanian’s version of Hyperborea, it is available qua PDF for a very reasonable price (10 USD) at RPG Now.  The box set also is available for 50 USD.