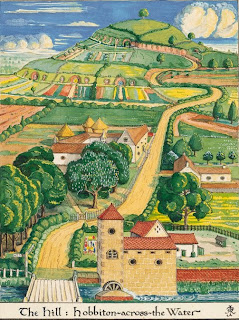 I found this to be an interesting article on the history of The Hobbit.  I already knew about the revision that Tolkien made to the original version of the story in order to render it consistent with The Lord of the Rings.  But this final point made in the article was new to me (in the sense that I never had noticed its significance before):


So thorough was Tolkien’s assimilation of his earlier work that even the revision of The Hobbit itself was incorporated into the story. In The Fellowship of the Ring, Gandalf and Frodo talk about the fact that Bilbo’s book (published as The Hobbit) contained a false account of the story of his finding of the Ring. Gandalf explains that the Ring had already begun to take hold of Bilbo, and when he told the story in his book, he made up the part about being given the Ring by Gollum in order to bolster his personal claim to it. The “true” story, the revised version, was only discovered later, but copies of the original could still be found in circulation.

The article also includes a nice gallery of Tolkien’s art (including the piece above).