The investigators – Prof. Nigel Blackthorne and Dr. Pierre Rioux – spend a full month on leave from their respective jobs, recovering from the wounds, both physical and psychic, acquired from their investigation into the curious case of Mr. Corbitt.

During this time, Pierre receives a letter from one of his former professors from medical school, Dr. Aldous Brewer.  In the letter, Brewer invites Pierre to visit him at his experimental sanatorium on Mid-Lake Island (which, as its name implies, lies in the middle of Lake Ontario).  Desirous to get away from the city for a few days, Pierre decides to accept the invitation, and convinces Nigel to come along with him.

Pierre and Nigel take a motorboat, controlled by an ancient Australian mariner who now works for Dr. Brewer, to Mid-Lake Island.  Once there, they discover that something has gone horribly wrong at the sanatorium.  All of the staff appears to have been slain – including Pierre’s former teacher, Dr. Brewer!  Much to their distress, the investigators discern that Brewer apparently was slain as part of some kind of dark, blasphemous ritual.

Nigel is puzzled to discover several books on ancient Egypt, including several newspaper clippings, in Brewer’s library.  Apparently these books and clippings are related to one of the inmates, ‘Darlene,’ who had been found years earlier in the backstreets of Montreal, with no memory of her identity.

The remaining inmates are attended to by Pierre as best he can.  Investigating for the rest of the night and throughout the next day, while ensuring that the inmates come to no harm, Pierre and Nigel learn that a terrible creature from another world inadvertently has been summoned by one of the inmates, an especially sensitive but schizophrenic poet.  The investigators discover that the creature sucked the ‘life force’ from the sanatorium’s maid, leaving her corpse a withered husk.

While exploring the rest of the island, Pierre and Nigel come across a rock with strange carvings, and disturbingly recent blood stains.  They also explore a lighthouse.  Much to their dismay, the lighthouse proves to be occupied by the creature that previously ravaged the sanatorium!  The creature is a roiling mass of gassy spheres, nearly transparent in the summer daylight, with a shifting, oily iridescence. 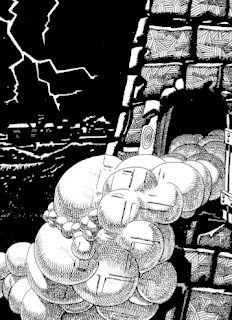 Barely escaping with their lives, the investigators return to the sanatorium.  There they discover, in the maintenance shed, one of the sanatorium’s former orderlies, Mr. Johnson, standing over the sacrificed body of one of the inmates, engraving bloody eldritch symbols onto her flesh.  Horrified, Pierre and Nigel shoot Johnson dead, and infer that he had fallen under the control of the creature from another world.

Following various leads from their investigations, and especially the notes of Dr. Brewer, Pierre decides to hypnotize Darlene, believing that she may have submerged memories from a previous life relevant to their present dire situation.  They learn that one of her personalities in an earlier life was that of the Egyptian princess ‘Annephis,’ a priestess of the cult of Bast.  During her time, Annephis turned back a horrific race of beings referred to only as ‘Those Who Wait.’  Annephis learned from her goddess how to destroy the creatures, and constructed many Elder Signs with which she and her followers drove the creatures into the Nile where they perished.  With the help of ‘Annephis,’ the investigators construct their own Elder Sign.

Nigel and Pierre then debate what to do.  They decide to load up a wheelbarrow with cans of gasoline, and return to the lighthouse.  They spread the gasoline on the stairs and floor of the lighthouse.  Igniting the gasoline, the eldritch creature is forced from the building.  Unfortunately, one of the creature’s pseudopods hits Pierre on the head, scarring his face with burning acid.  The pitiable physician collapses unconscious, his life force rapidly draining away.  Fortunately, the pseudopod withdraws in reaction to Nigel’s brandishing of the Elder Sign.  After a terrible struggle, Nigel uses the Elder Sign to force the creature over the side of the cliff.  Upon falling into the lake, the creature is destroyed, as fresh water is one of its (surprisingly mundane) weaknesses.

Nigel returns to sanatorium, bringing the unconscious Pierre with him in the wheelbarrow.  Unable to leave the island (as the motorboat had been destroyed by the mad Mr. Johnson), and lacking any way to communicate with the outside world, the investigators wait for the police to arrive.  In the meantime they bury the bodies left by the creature’s wave of destruction, and take care of the surviving inmates.

The investigators’ time on Mid-Lake Island proved to be anything but the idyllic escape that they had hoped it would be!

Fortunately, the subsequent two years proved to be far more prosaic for Nigel and Pierre…