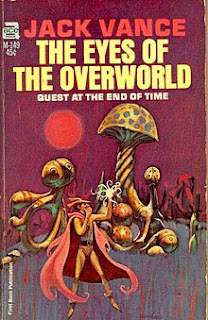 Following Jack Vance’s recent death, I decided to re-read the Cugel novels, The Eyes of the Overworld and Cugel’s Saga.  (Both books I had read over two decades ago, but only minimally remembered.)  I also finally read the original Dying Earth collection of stories.  I’ve read Vance’s Lyonesse trilogy twice previously – in fact, it’s one of my favourite fantasy series of all time – but strangely had largely neglected his Dying Earth writings until now.

After reading these tales of the Dying Earth, and enjoying them enormously, I had two thoughts that I decided to share here. 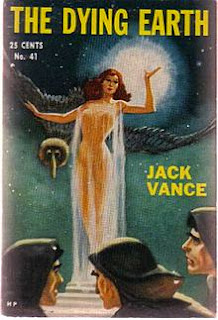 First, the influence of Clark Ashton Smith’s Zothique on Vance is manifest.  This especially is the case with the Dying Earth collection, which strikes me as almost an homage to CAS.  Like those chronicled by CAS, Vance’s protagonists are often hapless and arrogant, but occasionally sympathetic.  Both CAS and Vance enjoy skewering religious and political authorities, especially by showing the hypocrisy and vanity of such individuals.  And of course, both authors vividly depict a temporally distant earth that is simultaneously familiar and exotic, mundane and magical. 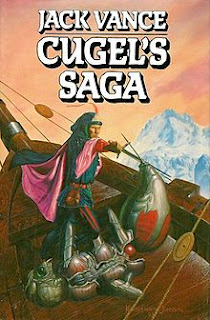 Second, it is hard to overstate the influence that Vance had on Gary Gygax and his version of Dungeons and Dragons and, even more so, Advanced Dungeons and Dragons.  There are, of course, the obvious influences – most notably, the entire D&D spell-casting (‘Vancian’ or ‘fire-and-forget’) system, but also magic items like ‘ioun stons’ (which Gygax used with permission from Vance), and the horrible lich ‘Vecna’, whose left hand and eye are described as artifacts on page 124 of the Dungeon Master’s Guide.

These influences are well known, and hardly worth mentioning.  But what struck me upon reading these books is the extent to which the magic-user class clearly is modelled almost directly on Vance’s magicians, such as Turjan, Mazirian, and Iucounu.  Many AD&D classes have direct literary influences.  The ranger class clearly is based upon Tolkien’s Aragorn, and the monk class purportedly is based upon the character of Kwai Chang Caine (from the 1970s television show ‘Kung Fu’).  I had always assumed that magic-users as a class were somewhat generic, meant to accommodate characters as diverse as Merlin and Thoth-Amon.  But I now think that Vance’s magicians are the direct source of the D&D and AD&D magic-user class.  This seems obvious to me now, but it only occurred to me upon reading these books over the past few weeks.  (Similarly, I think that the ability of thieves to use scrolls – with a chance of such attempts going horribly wrong – was inspired, at least in part, by the character Cugel.)

Anyhow, I highly recommend Vance’s Dying Earth stories to anyone who enjoys fantasy literature with a sharp sardonic bite.  I very much look forward to reading Rhialto the Marvellous in the near future.