Praise for the Warlord Chronicles 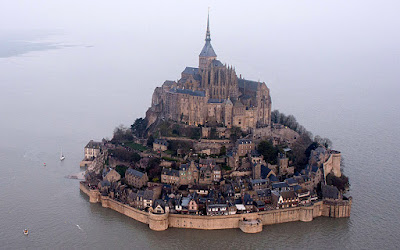 [Mont St. Michel is Ynys Trebes in the first novel, the capital of Benoic within Armorica.]

A significant influence on the recently published RuneQuest 6 campaign book, Mythic Britain, is the Warlord Chronicles by Bernard Cornwell.  I read the series a couple of months after joining Lawrence Whitaker’s Toronto-based Mythic Britain campaign, and regret not reading it earlier.  Not only are the novels excellent in their own right, but they do a superb job of conveying the nature and feel of late fifth and early sixth century Britain, including the religious and cultural beliefs of the Britons of that time.

The trilogy consists of The Winter King, Enemy of God, and Excalibur.  The novels cover over four decades (from roughly 480 to sometime after 525), although there are some scenes that take place decades later.  The entire story is told from the perspective of Derfel Cadarn, a former Saxon slave who is raised within the household of Merlin at Ynys Wydryn (Glastonbury), and eventually becomes one of Arthur’s chief warlords in his conflicts with other Britons and, following the achievement of a fragile unity amongst the Britons, against the Saxons.

An elderly Derfel relates the story of his life and the tale of Arthur to a young Queen Igraine of Powys, who visits him regularly at the monastery in which Derfel spends his remaining days.  Derfel writes his story in Saxon since Arthur was a pagan and is not looked up favourably by the Christians who now dominate Powys and the other British (non-Saxon) lands.  (Igraine collects Derfel’s scrolls to be translated by a scribe in her houseful.)  The head of the monastery, the old and miserable Bishop Sansum, especially is not fond of Arthur – for reasons, both amusing and infuriating, that become clear as Derfel relates his story.  While Derfel is now a Christian, as he relates his tale we can discern that his conversion is not especially sincere (though he never explicitly states this), whereas his loyalty to Arthur is unwavering.  We also know that at some point in his earlier life Derfel lost one of his hands, and experienced a profound romantic love.  These things are revealed early on, and motivate the reader to find out how and why they happened to Derfel – as well as, of course, learning the details of the harrowing and tragic story of Arthur himself.

I will not reveal any further details about the story here.  While the basic characters will be familiar to most – Arthur, Merlin, Mordred, Nimue, Guinevere, Lancelot, Galahad, Tristan, and so forth – Cornwell’s presentation of them is distinctive and almost certainly will surprise most readers.  The depiction of Lancelot in particular is quite … different from the standard portrayals.

What I want to note briefly here are some things that I found especially compelling about the novels.

1. The depiction of warfare is impressive.  Cornwell describes vividly what it is like to be in a shield wall.  Other combats are described in gruesome, blow-by-blow, detail – but never get bogged down.  The mundane activities necessary for war also are described.  I would be hard pressed to think of another novel that does such a good job in this respect.

2. The depiction of the society is deeply immersive.  Reading the novels I felt like I really was there in 5th and 6th century Britain.  And, for the most part, it was not a pleasant place!  Indeed, post-Roman Britain comes across as a kind of post-apocalyptic society.  Culturally, politically, and technologically, the land is a shadow of its former self.  In one scene Arthur’s army uses a Roman bridge across the Thames, and he laments that no one in Britain could build such a structure in his day.  Such knowledge, along with order and peace, has been lost, seemingly forever.

3.  The conflict between the druids, whose religion and influence clearly are on the wane, and the Christians plays a central role in the novels.  (There also are other cults: the one of Mithras the warrior god is important in Derfel’s life; the cult of Isis plays an important role in the story as well.)  This religious conflict – including the way in which the pagans regard the Christians, and vice versa – is portrayed vividly by Cornwell.

4. Finally the treatment of magic and the gods is very interesting.  Since the entire tale is told from the perspective of Derfel – and Derfel very clearly believes in the gods and magic – he describes what he witnesses and experiences as though the gods and magic really do exist.  For the most part, though, readers can interpret the events that happen as not involving the gods or magic.  In other words, many of the events described by Derfel are open to alternative, perfectly naturalistic explanations.  This ambiguity breaks down somewhat towards the end of the series, as some of the things that happen seem quite difficult to interpret in a non-supernatural way.  But this is the case only if we assume that Derfel is accurately reporting what he saw and experienced.  After several decades his memories may not be so clear – and, moreover, invariably are coloured by his supernatural beliefs – so he may not be the most reliable of narrators.  Consequently, the question of whether magic ‘really exists’ in the world described by Cornwell is left unanswered – an aspect of the novels that I really enjoyed.

In short, the Warlord Chronicles are a great read.  I highly recommend the series to any fan of fantasy of historical fiction.