Remembering the 1980s panic over Dungeons and Dragons 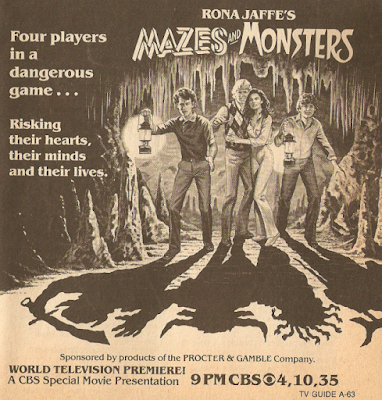 I finally got around to watching this ‘retro-report’ from the New York Times: When Dungeons and Dragons Set Off a ‘Moral Panic’.

I think that it’s quite good. It summarizes some of the main elements of the great D&D panic of the early 1980s, including the claims that playing D&D ‘causes’ suicide and murder amongst teens (by making them loose touch with reality, by glorifying violence, and the like), and that it promotes ‘Satanism’ and ‘the occult’.

It has some interesting clips of Gary Gygax from 30+ years ago, as well as other news reports from that era, and some recent comments from Tim Kask. It also includes some contemporary reflections on the hobby, including great remarks from well-known authors like Cory Doctorow and Junot Diaz. Towards the end of the report, Diaz touchingly comments on the value of role-playing games like D&D in cultivating creativity, providing a ‘safe place’ for ‘unpopular’ kids to socialize and develop self-confidence, and so forth. It’s a very ‘pro’ D&D piece overall.

Watching the report reminded me of my own experience with the 1980s hysteria over Dungeons and Dragons. Fears of ‘Satanism’ and the like concerning the hobby were never as intense or widespread in Canada as they were in the United States. (I think this was, at least in part, because of the absence of anything comparable to the American ‘Bible Belt’ in Canada. While of course there are Canadian fundamentalist Christians, they are a much smaller portion of the overall population than they are within the United States.)  Nonetheless, there was something of an echo of the panic in Canada, and especially in southern Ontario where I grew up, probably because of its proximity to Michigan (where one of the famous incidents that inflamed the D&D panic occurred in 1979, as explained within the retro-report).

Here’s what happened to me. There was a role-playing club in my high school in London Ontario (I think it may simply have been called the ‘Dungeons and Dragons club,’ even though we played games other than D&D; I can’t remember now). One day, in 1985 I think, a news reporter and a cameraman from the local television station asked to film one of our games. Needless to say, this was quite a thrill for a gang of nerdy adolescent boys!  And it was especially thrilling for me, since I was the Dungeon Master. I was dizzy at the prospect of having ‘my’ game displayed on television. The glory!

So we played our game for about an hour. Afterwards the reporter asked us some questions about it. Stuff like:


We gave pretty boring answers to all of her (rather leading) questions:


Over the subsequent two weeks I watched the six o’clock news like a hawk, waiting for my 15 minutes of fame. But it never happened. There never was any news story on our amazing high school RPG club. I was crushed.

Perhaps having a DM like Ms. Frost would’ve helped us get on TV: 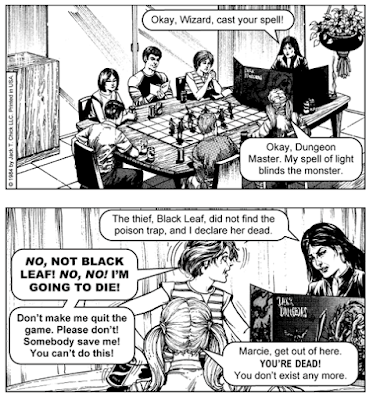