Personally, I'd love a 5e version of Planescape. It's my favourite 'official' setting ever published by TSR (though, tragically, I've never run or played in a pen-and-paper campaign). It is, I think, the most 'uniquely AD&D' setting ever -- it's 'mythology' in rooted in AD&D's distinctive, weird cosmology (the plethora of planes and their relations to each other), as well drawing heavily on singular AD&D creatures like the Githyanki, Tieflings, and so forth. I appreciate its strange mix of being a hub within a Moorcockian multiverse (and its associated 'law-versus-chaos' factionalism), and its gritty proto-steampunk aesthetic (I'm not a huge fan of steampunk generally, but I like the way it is expressed in the look and ethos of Planescape). Also, thanks to the presence of so many portals ('doors') to other planes, it's easy to connect Sigil to other D&D worlds. So I really hope that this happens! 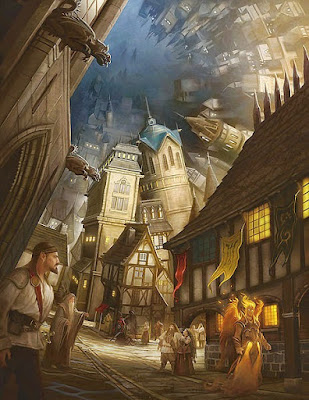 As for other old TSR settings, I suspect that Mystara (which I used to really dig, but find a bit too 'goofy' these days) and Greyhawk are just too similar to the Forgotten Realms to be done again with full-blown campaign books. Yes, I know that the fans can spell out many 'important' differences among these settings, but from a distance they're all 'kitchen sink D&D' worlds'. Not that there's anything wrong with that! But WotC already has FR.

I'm not that familiar with Spelljammer. It never grabbed me back in the day. But I'd have an open mind to it, if a new version were to be published. Likewise I would consider checking out a 5e version of Dark Sun, which always struck me as quite intriguing, but I never picked up for some reason during 1990s. Among the more recent settings, I don't know much about Eberron, but it looks distinctive and I would consider looking into it as well, should a 5e version be produced.

However, I have zero interest in Dragonlance. In fact, I loathe it. I personally would be grateful if it never reappears as an official setting (though if it does, it should be easy enough to ignore). It gave my teeth too many cavities back in the 1980s...