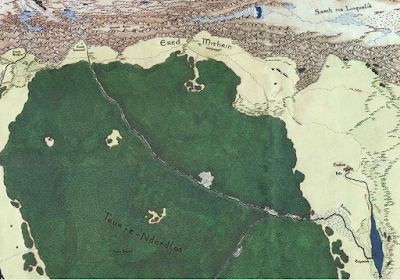 [A portion of P. Fenlon's magical map from ICE's Mirkwood.]

The agents of Thal Eolsen are successful in their inquiries, and the merchant provides Ulvmund with the location of his ancestral home. The Galmund fiefdom was located about 90 miles northwest of Dale. The family’s ancient tower was located atop a hill that overlooked a small lake, near the ‘Grey Road’—the Men-i-Mithrin—which runs north of Mirkwood (it once connected Dale and Lake-town to the dwarven holds of the Grey Mountains). The tower was called ‘Bar-en-Dindol’, which means ‘dwelling at the silent head’ in Sindarin (it was named by the first Lady to dwell at the tower, who hailed originally from Gondor and thus was fluent in the elvish tongue).

Excited by this news, Ulvmund implores his companions to help him investigate his family’s ancient land and stronghold. Hengil and Hartmut agree, so long as the companions then travel to the Anduin Vale and transport the malevolent black orb to the wizard Radagast.

The companions journey to Dale, and then onwards to the Galmund ruins. En route, on a grey and misty day, the company spots a rider in the distance. The rider does not approach the party, but instead gestures to the northwest; he then rides away, disappearing into the mists.

Eventually the companions reach the ancient land of the Galmund family: the small lake, village, hill, and tower. Unsurprisingly, the village and tower are ruins, though the main floor of the tower remains largely intact. 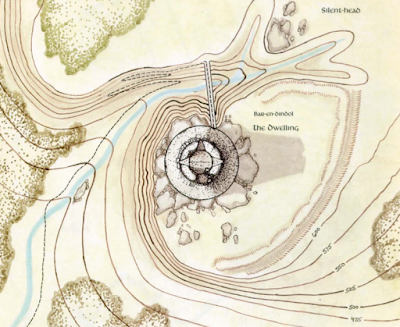 Within the tower, the companions discover some wargs (survivors, no doubt, of the Battle of the Five Armies). They defeat two of the vile creatures, but Ulvmund is knocked unconscious, and an especially large and vicious warg escapes to the north.

While Ulvmund slumbers he has a remarkable dream:


Ulvmund sees the tower of his family as it must have looked two centuries ago. Made of firm, clean stones, carefully mortared and smooth, the tower reaches into the sky for a hundred feet. It is a bright spear in the grim Marches. Bright eyed Northmen stand on the top, looking toward the dolorous peaks of the Grey Mountains. Below the Silent-Head hill, stretching along the small Quiet Lake, is a hamlet of farmers and fishers.

The peace and beauty of the scene is shattered when a black shadow passes over the tower and hamlet. The dragon has come! Smaug, for a malevolent reason known only to himself, desires to extend his desolation far beyond the ruined cities of Dale and Erebor. The wooden buildings of the hamlet erupt in flame; the villagers are all slain to a child. The great tower is not spared: with claw and fire, its upper reaches are destroyed. The guardsmen, servants, and other inhabitants are reduced to ashes or plummet to their deaths. Once the lands about the Silent-Head hill have been blasted, the dragon moves on to wreak destruction elsewhere.

The vivid nightmare concludes, and Ulvmund awakens in a cold sweat. Standing before Ulvmund’s prone body is the translucent image of his ancestor, Lord Alaric. With an expression of great sadness, makes a gesture that Ulvmund understands to symbolize a well. The ghost then points to the southeast from the well. Finally, as he begins to fade, Alaric points directly at Ulmund and nods. After a few seconds the image disappears. Were it not for its vividness and detail, Ulvmund would swear that he was still dreaming.

Following the instructions given by Lord Alaric, the companions discover a tunnel and three skeletons (the fleeing members of the Galmund family). The Galmund family sword is recovered. Having been crafted by the dwarves of ancient Erebor, the blade remains in excellent condition despite its many decades of neglect.

The next day the companions depart along the Men-i-Mithrin (“Grey Road”). Ulvmund Galmund vows to return someday, though, to rebuild and resettle his family’s demesne.