Some thoughts on the ending of the Game of Thrones... 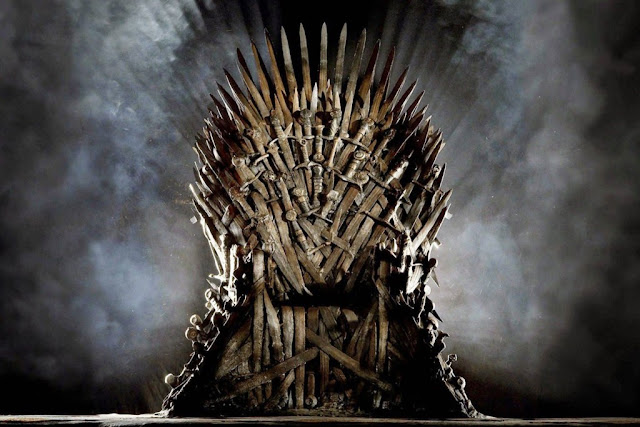 So that’s that. While I think that the last two seasons were the weakest of the series I also think that they were pretty solid overall (a ‘B+’ grade, in my judgement, as opposed to the ‘A+’ for seasons 1-4, and the ‘A-‘ for seasons 5-6). I certainly enjoyed watching them, and remain immensely grateful that this series was produced. (My grade 8 self, doodling warriors and wizards in the margins of his class notebooks, could never have dreamed of an eight-season television epic like this.)

Yes, seasons seven and eight felt rushed compared to the earlier seasons. There’s no denying that. Sometimes things happened too quickly, characters’ motivations were inadequately explained, and so forth.

And I’m disappointed about how the whole Night King story unfolded. An existential threat that had been built up for the past seven seasons seemed to be resolved in an overly tidy way (with Arya acting as ‘ninja Isildur’ vis-à-vis the Night King’s ‘Sauron’). We never learned anything about the Night King’s motivations, why he wanted to kill the Three-eyed Raven (Bran), and so forth. Even a little exploration of the Night King’s reasons for doing what he’s been doing for the past several millennia would’ve helped. Surely Bran (qua Three-Eyed Raven) would know—and be able to tell us—something? (At the same time, though, I don’t know how that storyline could’ve been resolved in a truly satisfying way. So at least I was surprised that the show did it in the first half of the final season—I was expecting it to happen in the final episode.)

Despite those criticisms (and other smaller ones), I think the series had a solid ending. I wasn’t perfect but it was solid.

Daenerys Targaryen’s decision to be ruthlessly destructive in the penultimate episode struck me as appropriate (though I would’ve had her attack the Red Keep directly first, had I written the episode). I think that one of the main reasons that episode has proven to be so polarizing is that many people misinterpreted her character—badly. I also think people were upset that Cersei did not receive her proper comeuppance—but that’s one of the main themes of GoT, namely, that just deserts are rarely dealt.

I also thought that it was appropriate for Jon Snow to be the one to kill Daenerys. (I was worried that it would be Arya—I’m so glad I was wrong!) And I was sure that Jon would not become king—the Targaryen dynasty had to come to an end. (I would’ve been outraged had he somehow ended up sitting on the Iron Throne.) I expected that he likely would die at the end—perhaps in retribution for having killed Daenerys—but having him rejoin the Night’s Watch was an ‘okay’ alternative. At least he finally petted poor Ghost!

Arya going off to play explorer (ach! that was supposed to be Tyrion—as I explained in my previous post) was a tad silly, perhaps, but then what else was she supposed to do? In any case, I’m glad Sansa survived and became Queen of the North. She ended up being one of my favourite characters.

The scene wherein Brienne wrote the final chapter of the life of Jaime was touching. The scene of the Small Council was entertaining. Yes, they were ‘fan services’, but I don’t think there’s anything wrong with that sometimes, especially in a final episode.

So, overall, I am fine with how the series ended. Seasons 7 and 8 suffered from being too short, and events certainly felt forced in places. But aside from Tyrion strangely losing much of his intelligence upon becoming the Hand of the Queen, the characters pretty much realized who they really were in their actions, and the ending made sense (for the most part) given the assumptions of the fictional world.

It certainly ended a million times better than Lost!