Some reflections on tonight’s rather epic Game of Thrones episode, ‘The Bells’…
[Needless to say, spoilers below!] 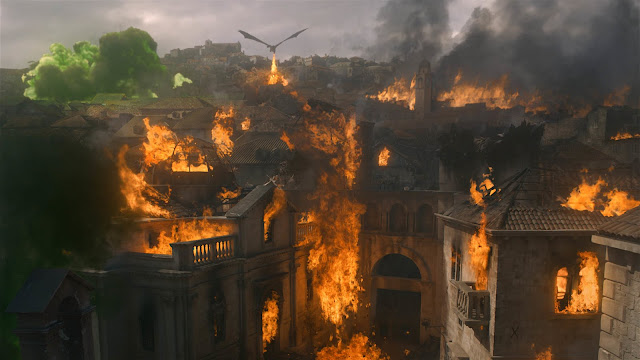 I thought that some of the key relationships were wrapped up in relatively satisfying ways (given how ‘rushed’ the final season seems overall). In particular, I was not left unsatisfied by the following relationship resolutions:

1. Tyrion-Varys.
2. Tyrion-Jaime. (I thought this scene was beautiful—surprisingly touching.)
3. Sandor-Arya. (Again, really great—a small bit of redemption for the Hound.)
4. Sandor-Gregor. (‘Cleganbowl’ was never going to be able to live up to fans’ expectations, but I thought that the fight was good fun—and it ended in a fittingly poetic way.)

I’m a bit mixed about the Jaime-Cersei ending. I was firmly convinced last week that Jaime was heading back to King’s Landing in order to kill Cersei (and that he harshly misled Brienne about his reasons in order to sever their relationship since he expected to die in his endeavour). But given that that did not go the way that I thought it would, how they died together seemed … appropriate.

The Euron-Jaime fight was terrible. (But then Euron Greyjoy is a ridiculous character in the television series. He’s pretty much as awful as the annoying-and-unmissed ‘Sand Snakes’.) It was out of character for Euron: why wouldn’t he just grab a ship and flee once the outcome of the battle was clear? Moreover, it was pointless—it did nothing to change Jaime’s ultimate fate. Blech…

Also, while I’ve never been a fan of Daenerys Targaryen—it always seemed clear to me that she had something of the ‘mad king’ in her, and so I never regarded her as the potential ‘saviour’ of Westeros—her descent into full-blown berserker madness struck me as a bit too quick to be plausible. A bit more control in her vengeance—say, going directly to destroy the Red Keep instead of strafing every neighbourhood in King’s Landing first—would’ve made more sense. But I guess the script writers felt it necessary to really (really, really) illustrate that Daenerys is the ‘bad guy’ now.
On a more positive note, I loved following Arya through King’s Landing as everything was being destroyed around her. Some comments that I’ve read said that it went on too long, but I thought it was great. In fact, I can’t believe how tense I felt the whole time. And it provided a much needed ‘townsfolk’ perspective on the cruel destructiveness of Daenerys’s actions (and war in general).

Overall, I’d rank this episode as tied with the second one (“A Knight of the Seven Kingdoms”) as the best of this (otherwise somewhat disappointing) season.