It looks like we may be spared another twee Dragonlance trilogy: “Dungeons & Dragons publisher Wizards of the Coast is facing a lawsuit from Dragonlance co-creators Margaret Weis and Tracy Hickman over scrapped plans for a book trilogy.” 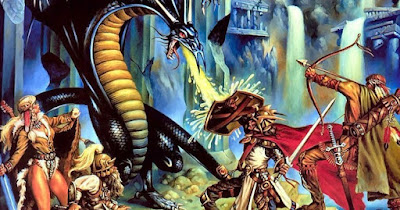 I am somewhat embarrassed to admit that, as a teenager, I enjoyed the original Dragonlance trilogy. I also owned a few of the modules and enjoyed the interesting maps and art at the time, but never managed to run or play them. Even just reading the adventures, though, I could tell that they were designed to compel the players to certain predetermined outcomes (what we today would call “railroading”). I preferred the more “open-ended” format of the earlier modules.

As the years went by, I came to view the success of the Dragonlance novels and modules as quite unfortunate. The setting’s success altered the default aesthetics and adventure philosophy of AD&D. The game moved away from the “Gygaxian” (or “Vancian”) swords-and-sorcery ethos that had characterized its earlier “Golden Age,” wherein outcomes were not predetermined, and no player characters were “essential” to any overarching plot. (Of course, DL was hardly the only factor that contributed to this change – the ouster of Gary Gygax no doubt played the most significant role.)

By the late 1980s I had stopped buying AD&D products altogether. (I regret this somewhat, as it meant that I missed out on Planescape and some of the other cool 2nd edition settings. I did pick up some D&D Gazetteers and the Rules Cylcopedia, but those were my first “nostalgia” purchases, as they seemed “retro” even then: they reminded me of my “early days” using the classic Moldvay/Cook Basic and Expert D&D rules, and X1’s “Known World.” But I digress…)

Anyhow, I really should let go of my decades-long resentment of Dragonlance. That water has long since passed under the AD&D bridge. If others prefer their fantasy schmaltzy, so be it. It harms me not. Hopefully fans of the setting will get their new trilogy is due course.