Giants in the Earth and the pre-TSR Known World

Some interesting notes from the original “Known World” Dungeons and Dragons campaign setting have been made available for all to enjoy. (See this thread at the Piazza forum or find the PDFs here.)

These notes are from a shared campaign developed and run by Tom Moldvay and Lawrence Schick when they were college students in the late 1970s. Both Schick and Moldvay went on to become employees at TSR for a few years. These notes clearly were developed into the “Known World” setting originally described in the module X1: Isle of Dread (and used by subsequent modules in the “Basic” and “Expert” D&D lines—eventually becoming, well after the departure of Moldvay and Schick from TSR, Mystara).

I've only skimmed the notes. Based on that skim, of most interest to me are the write-ups for fictional characters: Cugel the Clever, Kane, Conan, Fafhrd and the Gray Mouser, and the like. These would later appear in Dragon magazine’s feature: “Giants in the Earth: Classic Heroes From Fiction & Literature.”

As a great Jack Vance fan, I love the work they put into their write-up of the Dying Earth wizard Iucounu. Here’s the version that was published in Dragon issue 29: 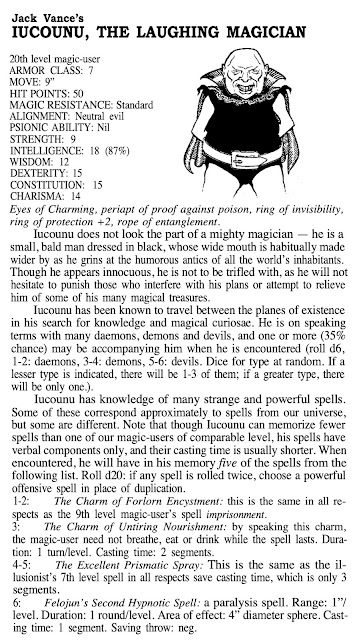 I’m not a member of the Piazza but it looks like an interesting place. Perhaps I’ll join…
Posted by Akrasia