Goodman Games to release The Caverns of Thracia

After Goodman Games releases their updated version of Dark Tower (scans of the original plus a 5e or DCC conversion, along with "The Chosen Sons of Set" addition) they will turn their attention to another Jaquays classic: The Caverns of Thracia. 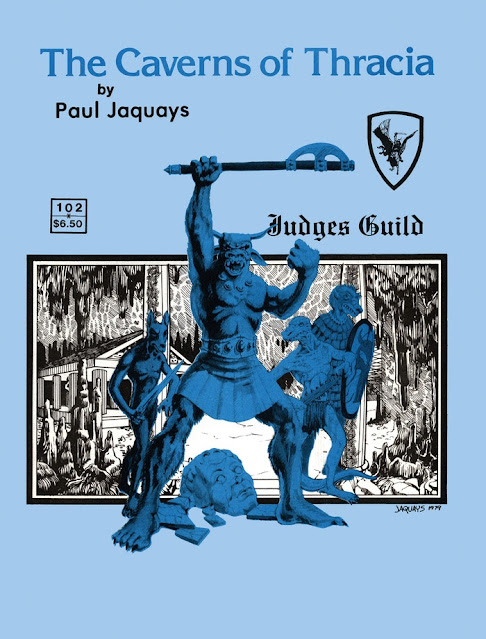 Here's the announcement from Goodman Games:

Continuing in the tradition of bringing classic adventures to new life for the next generation of fans of role-playing games, Goodman Games is proud to announce the acquisition of the acclaimed adventure The Caverns of Thracia from Judges Guild, and will republish it in fully converted 5E and DCC RPG editions with a targeted release date of 2023.

Coming on the heels of the acquisition of Dark Tower, The Caverns of Thracia is the second acclaimed adventure from designer Jennell Jaquays to join the Goodman Games stable. Both were originally published by Judges Guild.

The Caverns of Thracia is a beloved adventure module and rightly hailed as a classic. It was originally designed for parties of levels 2-6, and the 5E conversion will be balanced for similar play. The DCC conversion will also be for higher level characters. We will post additional information as the project continues!

Steeped in Greek Mythology, The Caverns of Thracia pits several factions against each other, with the PCs caught in the middle. The module is set among an intricate dungeon and lost city that were once the haven of lizard folk, before it was taken over by evil cultists. Now it is home to the slaves who have revolted against the cultists, and the lingering members of the cult trying to keep control for their own means. From angry Beastmen dwelling beneath the ground to a Cult of Thanatos living above them, dangers await around every corner and down each passage.

Jaquay’s use of factions and flexibility in running such a complex adventure has even garnered the nickname of “Jaquaying a dungeon”. Goodman Games plans to keep this tradition alive and well as we bring The Caverns of Thracia to a new audience. The details and historical background provided in the text create a rich setting from which you can build the foundation for many of your own adventures, and one that Goodman Games will use to enhance the setting in the updated release.

“My designs for Caverns of Thracia were born from the union of several themes: the three-dimensional nature of large cavern spaces, ancient Greek architecture, and a faction of beast men united together. Much of that can be seen in the cover art that I originally created for the adventure,” stated creator Jaquays.

“When I think back on my initial work on Caverns of Thracia, three images or concepts come to mind: the warriors in the cumbersome tubular Mycenaean bronze armor, the haunting figure of the death god Thanatos floating through the halls, and the rope bridges on level one that spanned the higher reaches of caverns whose floors were on the lower levels.”

This book will be a fully updated homage to the The Caverns of Thracia, crafted by Jennell Jaquays and originally published by the Judges Guild in 1979. Goodman Games will publish high-quality scans of the original first edition adventure module, plus commentary by tabletop role playing gaming legends and luminaries. Included will be a full fifth edition conversion of the entire adventure as well as a conversion for DCC RPG.

The temple and surrounding caverns and tunnels forms not just a fantastic adventure, but a mini-campaign with many hours of classic-style old school fun! Can you survive what waits inside The Caverns of Thracia?