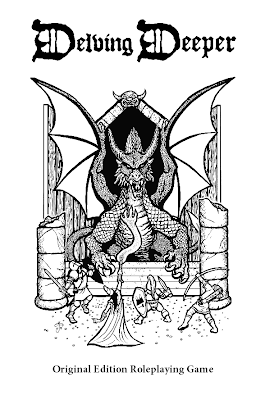 No longer will Brave Halfling Publishing be responsible for the Swords & Wizardry ‘White Box’ game. Instead, it will be publishing its own ‘old school’ RPG, entitled ‘Delving Deeper.’

The official announcement (from here):

Delving Deeper RPG closely emulates the rules of the earliest version of the world’s most popular roleplaying game. Go back to a time when every weapon did d6 damage, clerics could cast no spell at first level, only fighters could use magic swords, and if you wanted a locked door opened you had to bash the thing in! It is difficult to imagine in a world where multiple, weighty tomes comprise the rules; but the these three small books contain all you need to build a campaign that can span decades of real time! If you’re tired of trying to find the rule for determining whether your fighter is left-handed and is able to swim and just want to kill some goblins, have we got a game for you!

Delving Deeper RPG will be released directly from Brave Halfling Publishing as a digest boxed set of booklets, dice, character sheets, etc. the first week of April and in your local game store in May. We will be supporting Delving Deeper RPG with modules, supplements and campaigns. A free trademark license will also be available for third party publishers.

But there’s no need to sit around and wait. Come on back next Monday afternoon for our weekly Development Blog. But do more than that, help us put this thing together! Not only will I be offering sneak peaks at the text and art, I’ll be asking for your input too!

It’s sad to see S&W WB go away (at least no one seems to be producing it anymore), but I understand John Adams’ reasons for going this way. Best of luck to him!

(Good grief, I've been posting a lot today! Time to stop procrastinating, er, blogging, for a while...)