I recently received two items that I pre-ordered months ago from Cubicle 7. Happily, I can report that both look excellent. 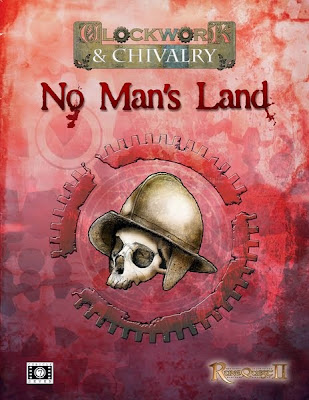 The first item is the third Clockwork & Chivalry adventure for MRQII, entitled ‘No Man’s Land’. I’ve only had a chance to skim it so far, but it looks like it lives up to the excellent standard established by the earlier instalments in this series.

Of note is the fact that ‘internet-friend’, master of d101 Games, and writer of OpenQuest, Newt Newport is quoted on the cover, saying:

“…quite simply in my opinion Clockwork & Chivalry is the best British fantasy setting since WFRP first ed.”

In addition, in the acknowledgements there is mention of yours truly! That was completely unexpected – and wholly unwarranted (all I’ve done is mention these fine books a few times at this minor blog) – but very nice indeed. Thanks, Peter Cakebread and Ken Walton! 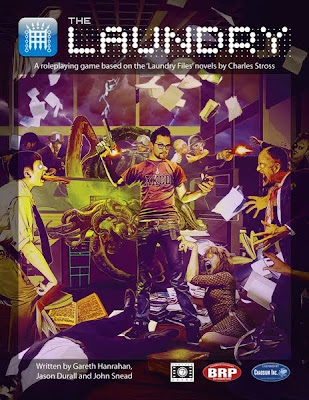 Using Chaosium’s BRP system, the Laundry RPG is essentially a variant of The Call of Cthulhu RPG, set in the ‘Lovecraftian’ (but not Lovecratft’s) universe of geek-agent Bob Howard, as described in a number of stories by well-known sci-fi author Charles Stross. In this fictional world, Britain’s valiant ‘Landry’ agency stands on guard against the Eldritch Horrors that seek to enter (and destroy, or at least render far less hospitable to human life) our plane of existence.

(Biographical note: I met Charles Stross a few years ago, I believe autumn 2005, at the Irish science-fiction convention ‘Octocon’. We were both discussants on a panel addressing the question of whether or not people would ‘survive’ being ‘downloaded’ into computers. I was acting as the token philosopher, trying to provide some insight into the metaphysics of personal identity. Stross struck me as a very nice guy, albeit someone quite impressed with himself.)

Cubicle 7 continues to impress – it is, I think, the best professional RPG company around these days.