With the corpse of Nhagren lying in the corner of his former apartment, and the blackened remains of the demon starting to reek, it clearly was time for us to depart. We marched unopposed out of the room.

Bōdric severed Malagan’s head, taking it with him to use as a grim ward to use against the remaining inhabitants of the citadel, all of whom feared the sorcerer more than any other person in Ryfel. Proceeding down the winding stairs, the surviving guards were suitably cowed by our manifest prowess, and complied with our command to take us to the sorcerer’s quarters.

In Malagan’s chambers we discovered two massive cages. The first contained a filthy and bruised Dorelite girl. A feral creature, it was clear that she had been mistreated in a most cruel manner. The other cage contained the supremely comely Cora-Dru, who tried in vain to conceal her nakedness from us. Seeing her again, I felt sudden quickening in my heart, and offered her my coat without hesitation. 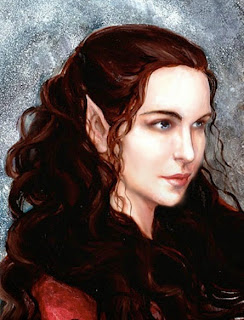 What was this strange sensation?

Sporting a self-satisfied grin, Bōdric hoisted up the head of Malagan for both girls to see. They let out squeals of joy at this evidence of their tormenter’s demise.

We quickly freed the captives. Despite liberating her, though, the Dorelite girl snarled at us, and I worried that she might attempt some futile attack. Fortunately, Aneera managed to calm her, and quickly took the girl into her care. We eventually learned that her name was ‘Ebrina.’ Else of her origin I learned naught.

While my companions looted the sorcerer’s compartment, I discovered a hidden compartment behind a loose stone within the hearth. It was impossible for me to see what was in the compartment, given its location. Foolishly abandoning my usual caution, I plunged in my hand to feel what was there. My fingers graced a leather-bound book of some sort. Before I could extract the volume, however, I let out a surprised yelp, as my vulnerable hand had been stung! Out from the hearth came scurrying a repulsive chitinous scorpion!

Acting swiftly, I cut into my flesh, and sucked out the venom as best I could. The fact that I can write these words testifies that I acted quickly enough. Yet enough of the venom had entered by bloodstream to cause me great discomfort for several hours afterwards.

My brother kindly smashed the arthropod into a pulpy mess with his heavy boot.

Biting my lip in pain, I extracted my costly prize. The book proved to be nothing other than Malagan’s black grimoire! With a sigh of satisfaction, I placed it within my pack to examine later. No doubt the secrets contained therein would further enhance my already formidable arcane powers.

Adralat discovered a scroll made of tanned human skin. Looking at it warily, I discovered that it contained a rune of Chaos. Shuddering, I placed it with the grimoire in my pack.

Departing Malagan’s grim chamber, we commanded one of the guards to take us to the gladiator pits. There we released all the slaves that previously had been doomed to fight to the death for the amusement of their Pan Tangian overlords. Whooping with joy and flexing their mighty thews, the liberated gladiators seized what weapons they could find, and stormed out of the compound in order to extract revenge on their former captors.

We also liberated Lord Salamir. Looking at his daughter with weird ambivalence, and us, his liberators, with strange contempt, the haughty Melnibonéan aristocrat merely said, “Let us go now.” 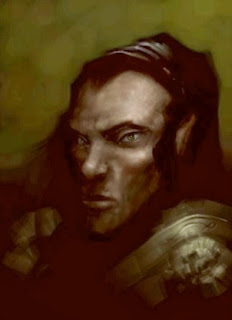 We emerged from the gladiator pits into the main yard of the Pan Tangian fastness. The gibbous moon illuminated the scene. As we marched to the outer gate, we spied the fat form of Governor Boorg being tossed from the third tower by some of his former guards. Just deserts, I thought, for that grotesque tyrant. We noticed, as well, several fires breaking out within the manse. Pan Tang’s hold on Ryfel had been broken with the death of the sorcerer.

We found some horses near the gate. Mounting them, we departed as swiftly as we could. News of the demise of Nhagren, Malagan, and Boorg seemed to be spreading like a wildfire throughout the city. As we rode to the city gates, we witnessed newly emboldened townsfolk clashing with Pan Tangian guards. Anarchy was purifying the rotten city, like a flame on a mouldering corpse.

We rode north from the city throughout the night and into the morning, the glorious sea to our right. Despite our exhaustion from the night’s many trials, the rays of the emerging sun invigorated us. By midday we made it to our hidden ship.

Never again would my nostrils be assailed by the foetid odour of Ryfel!

As we boarded the hornet ship, Lord Salamir recoiled at the presence of the dozen human prostitutes, Aneera’s ‘sisters,’ whom we had liberated from the (now destroyed) Frozen Gem. (I noted with mild amusement that our badly battered slave Myluk had his arm casually wrapped around the shoulders of one especially fair wench. No doubt she was simply helping him to walk!) Adralat exercised his considerable diplomatic skills in order to dampen Salamir’s indignation, as Ulor and Brax guided our now crowded ship out to sea.

For the first time in days I looked at the azure sky with genuine joy. We had been victorious in our mission!