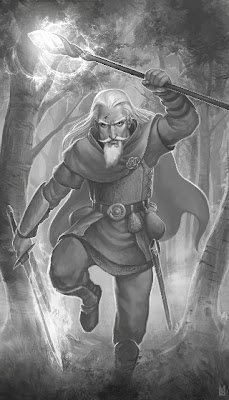 A few years ago, having become somewhat disenchanted with the ‘d20’ system and 3.5 D&D after having run two long-ish campaigns using those rules, I started to reconsider Chaosium’s classic Basic Role-playing system (‘BRP’).

I had owned Elric! Since it was published in 1993, and thought that it was a great game. Alas, I never had the opportunity to run a campaign using it, or, for that matter, earlier versions of Stormbringer (I did run, however, some Hawkmoon games in the late 1980s).

Chaosium lost the licence to publish games within the ‘multiverse’ of Michael Moorcock (the worlds of Elric, Corum, Hawkmoon, and so forth) in 2007. Given the strength of the Elric! system, independent of its setting, I wondered why Chaosium didn’t simply scrub off all the Moorcock references, and publish the system as a ‘generic’ fantasy role-playing game.

Well it looks like that finally is happening! Coming soon from Chaosium: Magic World.

MAGIC WORLD is a self-contained fantasy roleplaying game using the classic "Basic Roleplaying" system. The game allows you to play characters in a world of fantasy, adventure, and excitement. The rules of MAGIC WORLD are simple to grasp, while having enough options and complexity to suit any gaming style. Characters grow in experience organically, without relying on artificial constructs such as classes, levels, etc. Any sort of fantasy character you can imagine, you can play. MAGIC WORLD contains:

· Full rules for creating characters in a world of magic and fantasy.

· A robust magic system with nearly one hundred spells. Any character may become a spell caster with the right combination of raw talent, and training!

· A bestiary of more than sixty creatures to use as foes for the characters, or as the characters themselves! Play as any species imaginable: Human, Elf, Orc, Centaur, Troll, Talking Beast, and more!

· A gallery of enchanted items which might be found in your characters' adventures.

· A complete sample campaign setting, "the Southlands", to jump start your adventures.

While the title hearkens back to the fantasy booklet within Chaosium’s 1982 box set Worlds of Wonder, the new Magic World, including its magic system, is based primarily on Elric!, albeit with some tweaks and updates from the recent ‘Goldbook’ version of BRP.

More information on Magic World can be found in this interview with the editor of the game, Ben Monroe (ak.a. ‘zomben’). And here is a thread discussing the game.

With OpenQuest, Legend (MRQII), and, soon, RuneQuest 6 available as well, there exists a wonderful surfeit of BRP-based fantasy role-playing games. I always liked the relative simplicity of Elric!, including its magic and allegiance systems, so I look forward to adding Magic World to ‘the stable’.