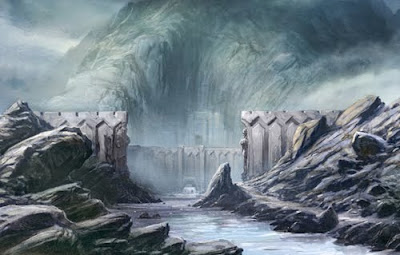 The One Ring™, the fantasy roleplaying game set in the world of The Hobbit™ and The Lord of the Rings™ to be released by Cubicle 7 Entertainment in partnership with Sophisticated Games, is one of the most eagerly awaited RPG releases of the year. With gamer and fan anticipation growing toward the August 2011 debut, Cubicle 7 today released some details about the format and content of the game line’s first release: The One Ring™: Adventures over the Edge of the Wild.

The adventure begins five years after the events of The Hobbit. The defeat of the Dragon, the ousting of the Necromancer and the stunning victory of the Battle of Five Armies has made the land a much safer place. The Free Peoples of Wilderland are looking beyond their own borders for the first time in generations. Merchants are opening up previously-abandoned trade routes, bringing prosperity to the region and renewing bonds of friendship between long-estranged cultures. But while Lords and common folk become complacent in their new-found security, much evil still lurks in Wilderland. From the Orc-holds of the mountains to the dark and corrupt depths of Mirkwood a darkness waits, recovering its strength, laying its plans and slowly extending its shadow.

Small companies of heroes set out to explore the newly-opened frontiers. Whether their goal is to protect their homes, recover the treasures of a lost age or carry out the orders of their King, they could find themselves in the front lines of the battle against the ancient enemy, in adventures over the Edge of the Wild.

Focusing on the region of Wilderland – from the east of the Misty Mountains through Mirkwood to the Lonely Mountain – the game covers the geography of the region and its major cultures. Immersion in the setting is at the heart of the game. Players create their characters from the cultures of the region, integrating them fully with the setting and giving them a personal stake in the unfolding events. The wood elves of Mirkwood, the dwarves of the Lonely Mountain, the Woodmen of western Mirkwood, the Bardings of Dale, Beornings, or hobbits that have ventured into the region after Bilbo’s return to the Shire, are among the characters featured in the initial release.

The August release is the first of a series of core game titles. 2012 and 2013 will see similar core releases expanding from that point, first with provisionally titled The Errantries of the King and then leading up to the War of the Ring. Each of these will expand the attention given to Tolkien’s world as well as the range of playable cultures and races. “You could compare our approach to the way Fantasy Flight has handled the 40K franchise,” commented Dominic McDowall-Thomas, Cubicle 7’s Director of RPG Development. “We have a huge setting to explore, and this lets us approach it in stages, covering each element in detail instead of trying to stuff an encyclopedia of information into the initial release. It also helps players build their campaigns in a dramatic fashion. With Adventures over the Edge of the Wild as the starting point, the grand story of The Lord of the Rings is starting out, in the background, but players start at a point where they can influence events instead of just being along for the ride.”

This approach also allows the game to take on an epic, multi-generational character. While characters of long-lived races can span the different setting periods, others can pass the torch to their heirs (spiritual or ancestral) in later periods. “Some people have compared this aspect of the game to the classic RPG Pendragon,” Dominic went on to say. “It fits really nicely with Tolkien’s long view of his world.” In fact, the game is highly focused on Tolkien’s themes, with an emphasis on such values as hope, valor, and wisdom reflected in the rules as well as the background material.

The initial release will consist of two core books: the Loremaster’s Guide for GMs and the Adventurer’s Book for players. A full line of supplementary products will follow, with early releases including a Rivendell sourcebook and a campaign guide.

I’m still uncertain about this game, but almost certainly will at least check out the initial release. (I’m not familiar with the ‘40K franchise,’ so the comparison with that RPG line was somewhat lost on me.)

The pictures in this post are from Cubicle 7, and so may be appearing in the game. I think that the first one is of Helm’s Deep, and the second of Dol Guldor. 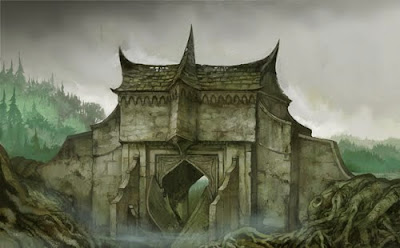 (My earlier thoughts on The One Ring RPG are here.)
Posted by Akrasia