Salon Article on Dungeons and Dragons 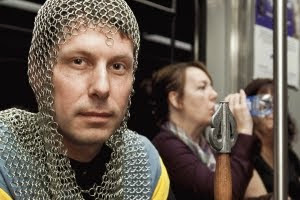 The article can be found here.

Unlike the author Ethan Gilsdorf (who, in case anyone is curious, has a website to promote his upcoming book, Fantasy Freaks and Gaming Geeks, here), I never completely abandoned role-playing games. Even during those long dry years when I wasn’t playing at all (especially the mid-late 1990s), I would consistently purchase the occasional RPG book (at least once a year), and make tentative plans to start again ‘soon.’

The concluding section of the article (about 1/5th of its length) reads somewhat like a promotion for Wizards of the Coast and the game that they presently call ‘Dungeons and Dragons’ (but which bears only a superficial resemblance to Ye Olde Game). That is somewhat unfortunate, but I suppose inevitable in an article intended for a general audience. The rest of the article, though, is enjoyable and worth reading. (I certainly agree with the author’s observations about the appeal of D&D to awkward male teenagers in those crazy years of 1979-1984.)