Our voyage from Imrryr to Ryfel took us across the Oldest Ocean, through the straight that separates Argimiliar from the Island of the Purple Towns, and into the Eastern Ocean. Thankfully, my internal organs did not rebel against the swelling waves on this trip. At last I had found, as the humans like to say, “my sea legs.”

Accompanying Bōdric, Adralat, and myself was the mighty warrior-slave of Lord Salamir, the remarkable human Myluk. Also joining us were two earnest human slaves expert at handling Melnibonéan ships, such as our sleek hornet barge, the Hot Needle of Inquiry. They were named Ulor and Brax, and seemed wonderfully, hopelessly loyal.

On the sixth day since leaving Imrryr our hornet barge entered the bay of Ryfel, which slices into the land where the backward realm of Pikarayd (to which Ryfel belongs) confronts the far more civilized kingdom of Argimiliar.

My half-brother, Adralat, Myluk, and I left the hornet barge in a small cove a day’s march north of the city. We instructed Ulor and Brax to guard the ship with their lives in our absence. Given the manifest Melnibonéan design of the Hot Needle of Inquiry, and the fact that Pikarayd languishes under the boot of vile Pan Tang, we thought it best to leave our ship hidden and attempt to infiltrate the city with as little fanfare as possible.

I will not squander my limited ink describing our overland journey to the city. Suffice to say that we did not get there until dusk. We managed to convince the city guards – ill kept and badly mannered Pan Tangian cretins – to allow us entry. 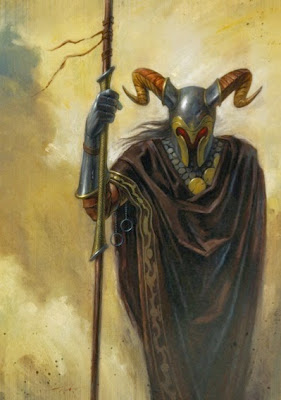 Ryfel is the most squalid, fetid settlement that I’ve ever had the misfortune of encountering. Ilmar was a perfumed palace constructed by the Eternal Lords of Aesthetics in comparison. The only noteworthy structures were the still impressive remnants of the Bright Empire. (Apparently this horrible little place was once a minor outpost of Melniboné.) The most significant building I spied was the mighty Black Citadel, which was mounted on a severe bluff to the northwest of the city, overlooking miserable Ryfel like a savage black eagle eying its prey.

Also worth noting was the octagonal Temple of Chaos. On each point was mounted a statue of a supercilious Lord of Chaos: Mabelode, Slortar, Marthrim, Aesma, Xiombarg, Balaan, Mahluk and Artigkern. Despite my partial Melnibonéan heritage, I have no fondness for the Lords, and hope that we can avoid the grandiose temple during our stay here.

Once in the city, we had a brief unfortunate encounter with some drunken city guards in the least squalid part of Ryfel, the “Old Side.” It amuses me to note that poor Bōdric cravenly parted with a hundred of his precious silver coins in order to avoid physical conflict. I would have preferred to have seen them lying in the gutters, their entrails strewn about the street! But I suspect that my half-brother’s course was the wiser.

Eventually we found ourselves in a massive quayside inn called the Frozen Gem. A remarkable place, the main floor was a common room filled louts, ne’er-do-wells, and other assorted riff-raff from across the Young Kingdoms in various states of drunkenness. Presiding over it all was an innkeeper, a canny pipe-smoking fellow named Zherez.

While we negotiated for a private room for the four us, Zherez kept looking at my half-brother and myself with his beady, suspicious eyes. I suspect that he may have discerned our subtle Melnibonéan features. Not a good thing in a city controlled by the disgusting Pan Tangians!

My worries aside, Zherez helpfully informed us of the slave auction taking place in the market square the next day. Hopefully we will be able to rescue Lord Salamir and his family then – assuming, of course, that we have not arrived too late!