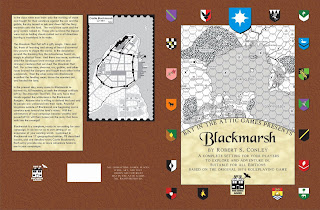 [Warning: Some Minor Spoilers are included in this Review]

The remarkable Rob Conley (of the ‘Bat in the Attic’ blog, and author of the brilliant Points of Light) has made available his delightful Blackmarsh mini-setting for free over at RPGnow (go here).

I downloaded Blackmarsh last night, and read it in under an hour while trying to fall asleep (it kept me awake!). Like all of Conley’s work, it is evocative yet wonderfully succinct. Clearly Conley takes to heart the Bard’s decree that “brevity is the soul of wit.”

The format of Blackmarsh will be familiar to anyone who has read Conley’s Points of Light books from Goodman Games, his ‘Wild North’ setting from Fight On! #3, or the various Wilderlands of High Fantasy products from Judges Guild (including the revised version published by Necromancer Games a few years ago, to which Conley also contributed).

Essentially, an overview of the Blackmarsh setting as a whole is provided in the opening pages of the booklet, followed by some notes on the main geographical features of the region (forests, rivers, mountain ranges, and so forth). The bulk of the booklet consists of keyed entries for the hexagonal map of the Blackmarsh region (i.e., each hex is assigned a number, e.g., 1810, and about 10% of the hexes have special features that are described in the booklet, e.g., monsters, citadels, ruins, towns, etc.). A separate map is provided for Blackmarsh Castle, and it is given a more detailed description than any other region.

I especially liked that a rich text version of the gazetteer was included in the download, as this greatly facilitates the ability of Game Masters to tweak different entries, and to customize the setting to their respective campaign worlds. It also enables GMs to insert appropriate game statistics, and so forth.

I also appreciated that a ‘players’ map’ was included. Such maps are very helpful in promoting ‘sandbox’ style campaigns, as they give players a clear framework for open exploration. Players’ maps also help GMs determine how knowledgeable the players’ characters are of the region, by giving him or her the power to add details to the map as appropriate.

The name ‘Blackmarsh’ obviously is an homage to David Arneson’s classic ‘Blackmoor’ campaign setting. Beyond its name and general ‘northern borderland’ ethos, though, ‘Blackmarsh’ is its own thing.

Blackmarsh, however, is related to some of Rob Conley’s other mini-settings: the ‘Southlands’ (from the first Points of Light book) is immediately south of Blackmarsh, and the ‘Wild North’ (from Fight On! #3) is about 100 miles to the east.

The background to the setting is intriguing: apparently, two millennia ago a meteorite fell to earth (‘the Mountain that Fell’), creating the ‘Smoking Bay,’ the great bay that lies at the centre of Blackmarsh. The meteorite also scattered an element known as ‘Viz’ throughout the region. Viz is a magical substance that can be used for a variety of purposes (ultimately whatever the GM desires). Also scattered by the meteorite were various ‘weird’ alien artifacts, and even creatures – although these are not described in the book (this aspect of the setting simply is a hook for GMs to develop further, as they see fit).

The non-human races – Elves, Dwarves, Halflings, Orcs, and so forth – are all pretty bog standard. Refreshingly, though, there is an organization of evil Elves, called the ‘House of Raven,’ at large in the setting. These Elves are committed to the destruction and/or subjugation of all other races (simply put, they are ‘Elf-Supremacists’).

There also are four human civilizations in the Blackmarsh area:

(1) The remnants of the ancient ‘Bright Empire’ (a somewhat confusing name for those familiar with Michael Moorcock’s Elric stories) live in the area around Blackmarsh Castle (which was an old ‘Bright Empire’ outpost; the Bright Empire itself collapsed about eight centuries ago).

(2) The new arrivals from the expanding ‘Grand Kingdom’ to the southeast (essentially, the main ‘lawful’ human civilization of Conley’s greater setting).

(3) The Vasan Vikings, who were displaced by the Grand Kingdom, and now engage in various acts of raiding and pillaging from their new headquarters in the northeastern part of Blackmarsh.

(4) Finally, the recently civilized Ostrobards who occupy a small kingdom in northern Blackmarsh.

Blackmarsh Castle itself was recently ruled by an evil arch-mage named Atacyl Oathbinder, who eventually was driven from Blackmarsh Castle (only to reappear later as a vampire). Before leaving, though, Atacyl apparently built some dungeons beneath the castle in order to pursue his vile magical studies. These were sealed when the castle was liberated, but obviously could serve as the basis for a few ‘dungeon crawl’ style adventures, for groups who like that sort of thing.

The main ‘good’ organization in the region is the ‘Blackmarsh Rangers.’ Based in the Blackoak Castle, the Rangers are committed to fighting evil and chaos in the north. It is possible that player characters could become members of the Blackmarsh Rangers, as their membership is quite diverse, and be sent on various missions by them.

Clearly, there are many adventure hooks in Blackmarsh. In addition to missions for the Blackmarsh Rangers, adventurers might search for the Viz scattered throughout the region, or perhaps the alien artifacts also scattered by the Mountain that Fell. Many ruins of the lost Bright Empire also exist, now dens of monsters or other vile things. Then there are the simmering political conflicts in the region (especially involving the Vasan Vikings and the House of Raven). And finally, of course, there are the dangerous wilds themselves, with monsters, brigands, and other dangers to be faced.

In short, I highly recommend Blackmarsh! It has many interesting elements to it (e.g., the Viz), and could very easily be adapted to most fantasy settings. Even if not used ‘as is,’ the product is a short, fun, and inspirational read!

(For another (positive) review of Blackmarsh, go here.)