The morning after our arrival in the squalid, degenerate city of Ryfel, Adralat, Myluk, Bōdric, and I headed over to the market square in order to observe the slave auction and, hopefully, purchase the freedom of Lord Salamir and his family.

For many hours we watched with boredom (tinged with melancholy, in my own case) the proceedings, conducted by an irritatingly loud Pikaraydian named ‘Manirez.’

An impressive group entered later in the morning. In front was an important looking, stick-thin Pan Tangian (whom we later learned was named ‘Nhagren’). Behind him was a palanquin born by mighty, sweating slaves. Inside the palanquin was one of the most corpulent creatures I’ve had the misfortune of gazing upon. Truly, this creature had abandoned his humanity long ago, degenerating into a horrific sphere of adipose. Apparently this blob was none other than the Pan Tangian governor of this backwater port, one ‘Lord Boorg.’ Both Pan Tangians were accompanied by a large number of the ‘black guard,’ the Pan Tangian soldiers who maintain some semblance of order in Ryfel.

At the back of this band was a figure even stranger and more disturbing than Governor Boorg – a Pan Tangian covered in tattoos that appeared to be runes, and dressed in a cloak made of (I believe) human skin. This manifestly malevolent human wore a necklace of bones, had bones placed in his hair, and a bone shoved through his nose. Clearly a sorcerer of some kind (we later learned that his name was ‘Malagan’), he was accompanied by a massive wolfhound – or so it looked at first glance; the beast could very well be a demon of some kind, given its size and demeanour. 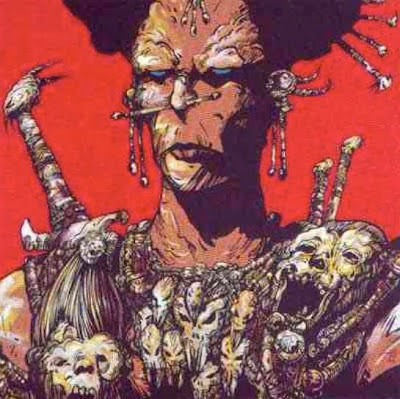 The auction continued for a few more hours, with Governor Boorg purchasing many attractive women and strong men (presumably the former for his harem and the latter for his gladiatorial pits). No one dared to bid against the grotesque governor.

After some time a number of mercenary warriors, all dressed in blue, arrived at the square. They were led by a well groomed blond fellow with brilliant blue eyes, who, like his men, also was dressed all in blue, and who looked like some kind of aristocrat. The ‘Blue Captain’ (as I referred to him in my mind’s voice) alone seemed uncowed by Governor Boorg and his entourage.

Intriguingly, Bōdric claimed to recognize the mercenaries. Apparently he had come across them at some time during his many travels throughout the Young Kingdoms. To my half-brother’s obvious frustration, though, he could not place the mercenaries, or name their leader.

After some time there was a commotion at the edge of the market square, as some late traders arrived with three slaves covered in hooded cloaks. Once the slaves were ushered onto the auction stage by the auctioneer Manirez, their cloaks were removed, leaving them shamefully naked, and revealing them to be the Melnibonéans whom we sought: Lord Salamir, his wife, and their daughter Cora-Dru. 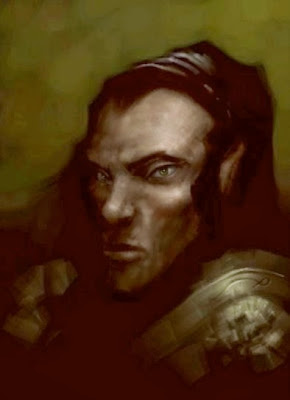 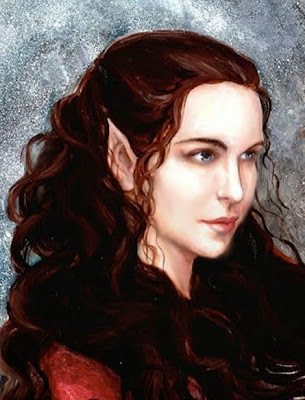 Although my innate civility prompted me to avert my eyes from their naked forms, I nonetheless spotted an interesting rune tattooed onto the chest of the Cora-Dru. Helplessly curious, I scrutinized the rune from afar. Alas, I could not identify it, but I recall its form as follows: 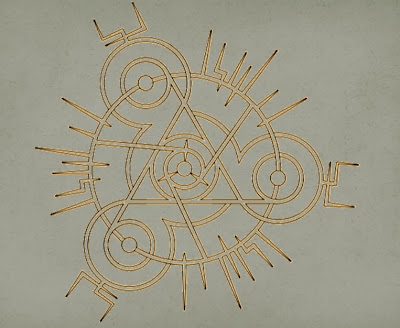 The bidding for each member of the noble family began at 500,000 silver coins. Blast – by the Grey Lords! The absurdity of our ‘cunning plan’ to purchase the aristocrats with our own money slapped my stupefied mind like a cold wet fish. There was nothing for us to do but observe who purchased the Melnibonéans.

Governor Boorg and the ‘Blue Captain’ entered into a bidding war for each Melnibonéan. In the end, Boorg purchased Lord Salamir and Cora-Dru, whereas the ‘Blue Captain’ succeeded only with Lady Salamir (our lowest priority, given our instructions from Empress Sathril and Prince Quire).

Unlike all of the other slaves sold today, none of the Melnibonéans were branded. I was grateful that, at least, they were spared this painful indignity.

Boorg, his entourage, and his newly purchased slaves left the square, heading for the massive Black Citadel at the edge of Ryfel. We decided to follow the ‘Blue Captain’ and his mercenaries, trailing them (thanks to our slave Myluk’s skill) to a ship at the docks. The ship bore the markings of the Isle of the Purple Towns. At least we now knew, roughly, where all three of the Melnibonéan captives were held.