Our plan to purchase and liberate the Salamir family at the slave auction was a pathetic failure. I cannot believe that we did not consider requesting a large sum of money from the Empress in order to assist us in our mission!

Uncertain of how to proceed, Adralat, Myluk, Bōdric, and I returned to our room at the Frozen Gem. We sat in glum silence for several minutes.

“Well, gents, I see no reason to linger here in despair,” Adralat said suddenly with grating chipperness, “I think that I’ll go down to the common room, mingle with the locals, and see what I can learn. Sound cool?”

“But take Myluk with you to protect you from harm,” I advised as Adralat opened the door. Our burly warrior slave departed with the strange wanderer from another world.

My half-brother and I sat in our room for the next three hours, alternating between brief frustrating discussions about what to do next and periods of resigned silence. At last we decided to head down to the common room ourselves to see what Adralat was up to, and to sooth our nerves with some of the alcoholic beverages consumed by the barbarians in this uncivilized crumbling outpost.

As we descended the stairs towards the common room, we saw that it was full of rowdy sailors, merchants, soldiers, and less respectable types, engaging in a wide variety of activities: gambling, telling jokes, singing (poorly), accosting serving wenches, and – above all else – drinking. The patrons seemed to be from every one of the Young Kingdoms, united only in their vulgar manners and savage hedonism. Overseeing the broiling chaos with the serene calm of a Lord of Law was the innkeeper Zheren, puffing away at his clay pipe.

Suddenly, much to my surprise, the stick-thin Pan Tangian whom we had spied earlier in the day leading Governor Boorg’s entourage at the slave auction – the wan administrator known as ‘Nhagren’ – stormed into the common room. He screamed the name ‘Aneera’ at the top of his lungs several times, irritating my delicate ears. Eventually, a rather comely red-haired courtesan appeared. The Pan Tangian grasped her wrist and departed abruptly with her for the ‘entertainment’ rooms on the second floor of this den of iniquity. 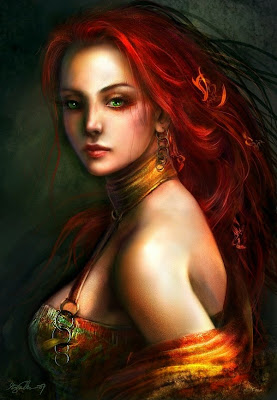 Bōdric and I made the rest of our way down the stairs into the roiling horde of unwashed humanity, weaving our way to the bar with some difficulty. We ordered a couple of murky blackish ales – apparently the least unpleasant beverages on offer here. As we left the bar to find some seats, I accidentally spilt some of my ale on a brutish fellow sitting at a table with another similarly brutish fellow.

“My apologies,” I said in my least condescending tone, hoping to avoid any further interaction with the gruesome animal.

“Oi! Oi! Pig! You’ll pay for messing me cloak!” shouted the savage, as he leapt to his feet in order to assault me.

Suddenly Bōdric and I were forced into a brawl with these two louts. Without warning I was struck in the head, leaving me bruised and dazed, a trickle of blood coming from my right ear. Acting swiftly, my half-brother plunged his fist into the face of my assailant, knocking him out immediately. Outraged at this development, the other brute drew his blade. As he did so, though, I uttered my Rune of Reflection. Consequently, as my new foe thrust his sword towards me, it rebounded against him, drawing blood (although not enough to end his pathetic life, alas). Shocked, the primitive animal dropped his weapon and cowered away from me, screaming, “Witch! Witch! Witch!”

Around us the rest of the common room had descended into chaos, as additional brawls broke out. Like chaos-infected primates, the other common room inhabitants had decided to imitate our encounter with their own petty violence.

Looking worried that the fool’s yelping might attract further unwanted attention – despite the wild mêlée swirling about us – Bōdric quickly knocked him out with two rapid strikes with the pommel of his sword.

Across the room we spied Adralat calmly gambling with some rogues, apparently undisturbed by the madness churning around him. Behind our strange human companion, like a protective demon, Myluk stood guard, pounding any fool who approached the table into immediate unconsciousness (or perhaps even death). Glancing at each other, Bōdric and I silently agreed to return to our room immediately, rather than trying to join Adralat.

Upon returning to our quarters, I bandaged my head, and silently thought about what had transpired for a few minutes. Then I turned to my half-brother and announced: “Bōdric, I have a cunning plan. I think that we should grab the administrator Nhagren now. He is our key to finding Lord Salamir and Cora-Dru!”

Bōdric looked at me with surprise. “Are you sure, Edvund? The risks seem very great. Very great indeed. Perhaps we should see what we can do tomorrow. What more we can learn…”

“No, Bōdric,” I replied firmly, “We must act now. The longer we wait, the more Lord Salamir and his daughter risk being harmed … or worse.”