The One Ring RPG Characters Preview 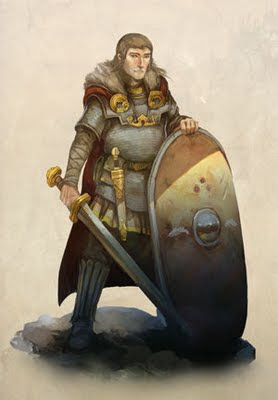 Cubicle 7 has started posting previews for its forthcoming The One Ring Middle-earth RPG. The first one concerns 'Characters':

Adventures over the Edge of the Wild begins the epic of The One Ring in Wilderland – the land that ranges from the Misty Mountains in the West to the Iron Hills in the East, and from the Grey Mountains in the North to the Southern tip of Mirkwood.

Players create their characters from the heroic cultures that inhabit those regions of Middle-earth that Bilbo the Hobbit explored along his journey to the Lonely Mountain:

Bardings: Led by King Bard, the Bowman and Dragon-slayer, the Bardings have rapidly rebuilt Dale and are the fastest-growing power in Wilderland. A prosperous culture, Barding merchants seeking new markets for their goods are the driving force in the efforts to reclaim Wilderland in the name of civilisation.

Beornings: The followers of Beorn are a rugged and self-reliant people. Their loyalty to their chief and his teachings is strong, and they protect their lands and oppose the Shadow with matchless ferocity.

Elves of Mirkwood: Centuries of battle with the Shadow has left the Elvenking suspicious of all other peoples. But with the alliance made between Elves, Men and Dwarves for the Battle of Five Armies and the eviction of the Necromancer from Dol Guldur, perhaps he and his people can forge stronger links with their neighbours.

Woodmen: The Woodmen, aided by the wizard Radagast the Brown, have endured in the Shadow of Dol Guldur for many years. Now, with the Necromancer gone, their culture has the opportunity to flourish and grow.

Hobbits: Mainly a cautious people, content to stay at home and tend their gardens, Hobbits are not usually given to adventures. But inside many young Hobbits is a thirst for adventure, a desire to see first-hand those things described in the old tales.

The first set of a trilogy of core publications, The One Ring: Adventures over the Edge of the Wild puts players on the road to different realms and regions, towards the final confrontation against the Shadow many years later: the War of the Ring.

(Taken from here.)
I have to confess that I'm not especially keen on the approach that Cubicle 7 is taking with this game, namely, providing rules and information only for certain regions of Middle-earth in different products. (There apparently will be 3 'core' publications.)
Nonetheless, this approach will certainly distinguish TOR from its predecessors, ICE's Middle-earth Role-playing (MERP) and Decipher'sLord of the Rings RPG. In any case, given my abiding love for Middle-earth, I remain curious about the final product, even if I never end up playing it.
Posted by Akrasia