A new campaign setting coming for Against the Darkmaster! 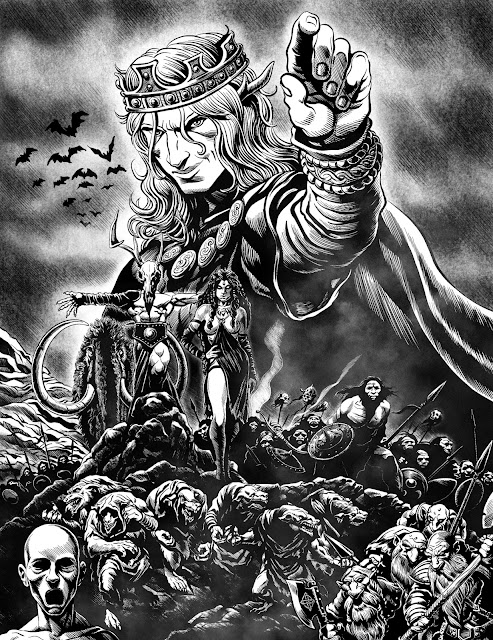 I’ve mentioned my profound fondness for the Against the Darkmaster (VsD) FRPG before here. (If you ever liked MERP, or thought that Rolemaster was cool but could use some streamlining, then do yourself a favour and check out VsD!)

The formidable core-book includes a very impressive short campaign, “Shadow of the Northern Woods” (or at least it looks impressive; I haven’t had a chance to run it yet myself). Now the folks who created VsD are working on a campaign setting and set of adventures called Secrets of the Golden Throne. The setting is the island of “Awallon” (I personally would pronounce that “w” as a “v”) and looks like it can be inserted into most fantasy campaign worlds, or simply treated as a self-standing setting with little reference to the “outside world.”

Here's a brief description of the campaign’s premise:

The High King is dead, betrayed by one of his owns and murdered by the Maimed King, one of the Darkmaster’s most wicked and powerful servants, who now sits on the Golden Throne.
A strange Blight plagues the land, as hordes of marauding Wendals, led by the Maimed King’s lieutenants, ravage the countryside.
The Darkmaster’s triumph, however, isn’t complete. With her last strengths, Princess Morgawse hid the secret of the Golden Throne in the Dreamworld, out of the reach of the cruel Maimed King.
Fate brings our heroes together, and a strange dream sets them on a quest that will see them facing the machinations of the wicked Maimed King and his followers.

If you’re also interested, you can download a preview, including an initial adventure, “A Summernight Dream,” here. In the download are five pre-generated characters, including three that use some of the new kins (gnome, changeling) and options that will be available in the full book.

Among the things to be covered in the book:

I’m generally reluctant to support projects on Kickstarter these days, but I’ll happily make an exception for this one! (If you want to be notified when this project goes “live” go here.)