Thoughts on the Rings of Power and House of the Dragon

“The Rings of Power” (TRoP) and “House of the Dragon” (HotD) are both just past the halfway points for their respective seasons. Overall, there is no denying that the writing and acting in HotD is superior. Yet I find myself feeling rather indifferent to its story and characters. Unlike the original “Game of Thrones” series, there are no characters that I really care about – no one remotely as interesting, entertaining, or sympathetic as Tyrion or Arya. I kind of hope that Daemon doesn’t eventually become king, as he clearly would be a rather bad one, but he’s not in the same league of awfulness as, say, Joffrey or Cersei (or at least not yet). (However, episode six reveals Larys Strong as perhaps a spiritual villainous ancestor of Petyr “Littlefinger” Baelish, so perhaps there’s some hope.)

Overall, I just don’t care that much about how things in HotD will turn out. Should Rhaenyra become queen?

I’ll keep watching it, though, as I’m enjoying it well enough (and I’m a sucker for fantasy). 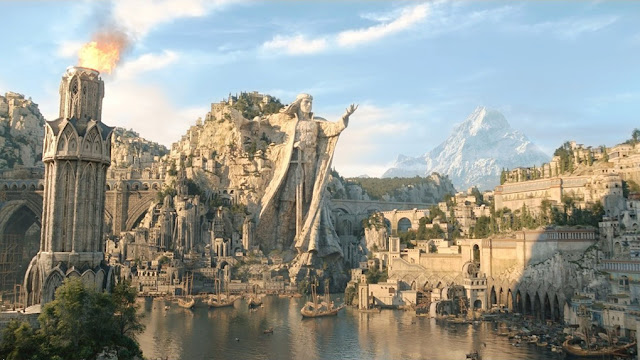 In contrast, TRoP – despite how deeply frustrating and frequently disappointing I have been finding it* – has certain hooks in me. I also care about some of the characters more than I care about any of the ones in HotD. Part of this of course is carried over from Tolkien’s writings. For instance, Elrond and Elendil are two of my favourite characters from the history of Middle-earth, so I find myself invested in their stories despite the series’ flaws. And Ar-Pharazôn’s tale is a great one, so I want to see how it is presented in the series. But I also find the “new” villains (or potential villains) far more intriguing than anyone in HotD. Adar in particular stands out, but I also want to know who Halbrand is (and what his story will be), likewise for “The Stranger,” and others.

In particular, I find myself obsessed with finding out (hopefully by the end of this season):

o      Is he Maglor [my current guess given his gauntlet]? Eöl or Eöl’s son Maeglin? [Of course, unlike Maglor, those two are supposed to be dead...] Sauron? What is his plan? Why does he care for the orcs so much? [Perhaps he helped Morgoth form the first orcs from captured elves in ancient times?] Why does his armour have a design similar to Gil-Galad’s?

o      Why does Adar want it? What role (if any) will it play in transforming the Southlands into Mordor?

o      Is he Sauron/Annatar? An Istar? A balrog? Something else? [My current guess is that he’s one of the Istari. I’m hoping he’s a Blue Wizard but worried that lazy writing will make him Gandalf.]

o      Is he Sauron? The Witchking? A different future Nazgûl? The king who makes the oath to Isildur at the Stone of Erech, only to break it during the War of the Last Alliance? [The latter possibility would require relocating the people of the Southlands to the White Mountains; not entirely implausible, given that the Southlands are doomed to become Mordor.] Is he Theo's dad?

o      Someone already in the show, one of the above? Someone yet to appear? Is he already giving Celebrimor advice “offscreen” as “Annatar”?

-       Who are the weird cultists who appeared briefly in episode 5 and seem to be tracking the Stranger?

-       How will the friendship between Elrond and Durin IV unfold?

So I have lots of questions. I just wish the show had better writers!

It's an odd thing to recognize one series as clearly superior overall yet care much more about what happens in the other.

I will say this for TRoP: the sets are beautiful. The scenes of Lindon, Khazad-dûm, and Númenor are amazing. And I like the look (and music) that they have created for Númenor: somewhat Minoan/Mycenean in terms of colour, murals, and overall aesthetics. The Númenorean ships look distinctive and cool. I especially liked the statue of Eärendil the Mariner with his welcoming hand – a nice contrast to the raised palms of the Argonath statues (Elendil and Isildur) that we see in the “Fellowship of the Ring” movie. 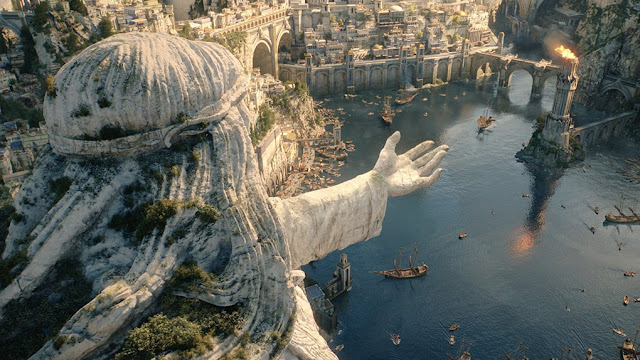 * Some of my frustrations and disappointments with TRoP:

Here are the three things that I find the most vexing about TRoP so far:

First, as I’ve mentioned before, the series writers are greatly compressing the timeline of the Second Age. Roughly, they are squeezing almost 2000 years of history into perhaps a decade or two: it covers events from shortly before the forging of the rings of power (the 16th century) to the War of the Last Alliance (the 35th century). I really dislike this move and think it’s unnecessary – the series could’ve had two parts, the first covering the forging of the rings of power and the War of Elves and Sauron, and the second covering the downfall of Númenor and the War of the Last Alliance.

The portrayals of some of the characters, especially Galadriel and Gil-Galad, strike me as simply terrible. Galadriel is comically monomaniacal (she’s not a son of Fëanor!). And Gil-Galad comes across in the show as an oleaginous politician. I really hope they improve as the series progresses. (In contrast, others, e.g., Elendil, Pharazôn, Elrond, and Durin IV, are solid in my view.)

The whole invented story about how a Silmaril (plus a pure elf, an evil balrog, a tree on top of the Misty Mountains, and a bolt of lightning) caused the creation of mithril – and (adding to this absurdity) that only mithril (because it contains some of the light of Valinor thanks to the Silmaril) can “cure” all the Elves that remain in Middle-earth – is absolute rubbish. I’m really hoping that the Silmaril-mithril story turns out to be false within the series. Elrond does refer to it as apocryphal, and in the previous episode Adar refers to the many “lies” told about Middle-earth. So perhaps this is a false tale promoted by Annatar to obtain mithril for his own purposes? (Fingers crossed!)