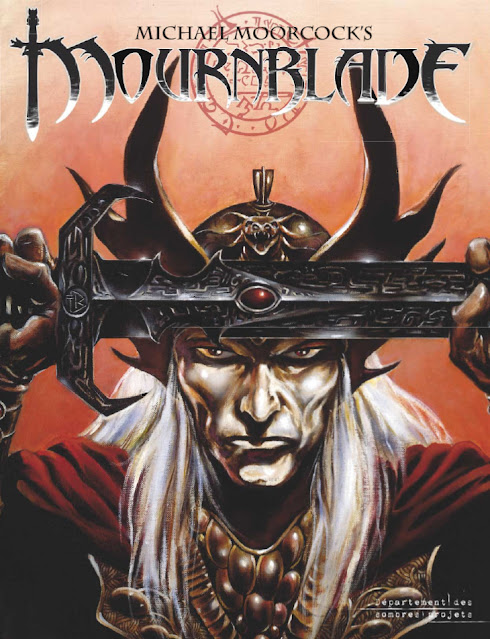 It’s been about a decade since the last official Elric-based roleplaying game went out of print in the English-speaking world: the excellent Elric of Melniboné (EoM) supplements written for Mongoose’s RuneQuest II (MRQII).

(More information about this line is available here. I had the good fortune to play in a MRQII EoM campaign with one of the line’s primary authors, Lawrence Whitaker; the first two-thirds of that campaign are described here. Since Mythras is a direct descendant of MRQII, it should be easy to use the EoM books with Mythras, should you be able to track them down. Tragically, the books are not available even in PDF anymore.)

In France, however, there is an Elric FRPG that has remained in print during this time: Mournblade from Le Département. (A brief overview is available here. Interestingly, Mournblade seems to draw quite a bit on Whitaker’s “flavour” work for EoM, that is, material on the history, cultures, etc., of the Young Kingdoms.)

I’ve long been intrigued by Mournblade and would’ve liked to read it. Alas, my Ontario high-school-mandated French proficiency has atrophied far too badly over the decades for such an endeavour to be viable.

Fortunately, an English version of the Mournblade “starter set” will soon be available in PDF as part of the Kickstarter campaign by Le Département for their boardgame Elric: Rise of the Young Kingdoms. You can “support” the KS for €10 and get the entire Mournblade set but nothing having to do with the boardgame. (This strikes me as quite odd, something I’ve never encountered before. But since I don’t want the boardgame—it looks beautiful, but I doubt I’d ever be able to play it—but I do want the FRPG starter set, I’m happy for this option.)

Here's what you get with the starter set (all digital):

Apparently the complete Mournblade line will be released in English eventually, so this is a relatively low-cost way to check out what the game is like.

Michael Moorcock’s “Eternal Champion” setting—especially the stories concerning Corum and Elric—remain one of my favourites, especially for role-playing campaigns. So I’ll be getting this Starter Set.

Blood and Souls for Arioch! 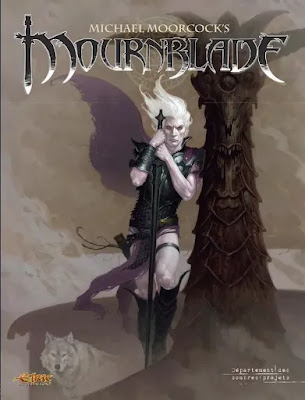