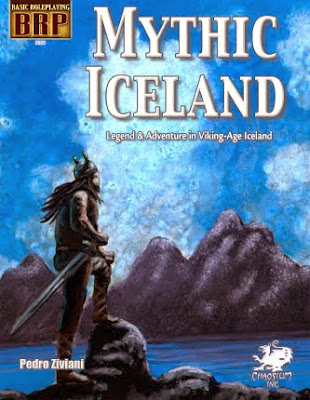 This looks interesting. Here’s the blurb from Chaosium’s site:

MYTHIC ICELAND brings to life the world of the Icelandic Sagas and fairy tales.

The Nordic and Celtic peoples settled Iceland in the 9th century coming from lands with rich traditions of folklore, where the mythical and supernatural are part of daily life. They discovered an island of striking beauty, with inland valleys, richly grassed and forested lowlands, massive glaciers, and impressive volcanic mountain ranges. They also found the land to be teeming with spirits of nature and mythic creatures.

This small country produced the largest body of medieval literature anywhere in Northern Europe. Mythic Iceland mines this rich tradition, and weaves background and adventure with the roleplaying experience of the Basic Roleplaying system.

Those pictures that I posted earlier this week would be quite useful for a campaign using this supplement!