Yesterday Goodman Games released the free ‘beta’ version of its forthcoming Dungeon Crawl Classics Role-playing Game (you can check it out yourself here).

This is how Goodman Games describes their ‘old school’ RPG:

You’re a reaver, a cutpurse, a heathen-slayer, a tight-lipped warlock guarding long-dead secrets. You seek gold and glory, winning it with sword and spell, caked in the blood and filth of the weak, the dark, the demons, and the vanquished. There are treasures to be won deep underneath, and you shall have them.

Return to the glory days of fantasy with the Dungeon Crawl Classics Role Playing Game. Adventure as 1974 intended you to, with modern rules grounded in the origins of sword & sorcery. Fast play, cryptic secrets, and a mysterious past await you: turn the page…

It is one day later, and Ye Auld Skül blogosphere has been flooded with ‘first impressions’ of the beta version of DCCRPG.

• Bat in the Attic

• Lamentations of the Flame Princess

Well, I certainly do not want to be left out of the fray! So here are my initial impressions:

1. I very much like the art. (Perhaps there is too much? It is almost overwhelming. But it creates a wonderful overall ethos for the game.) Here is a sample piece by Pete Mullen: 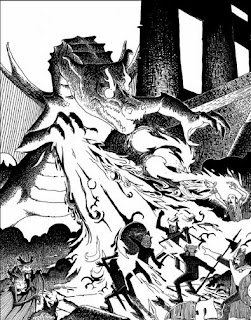 2. I like that the game is dedicated to the recently departed Jim Rosloff (a fine artist from TSR's early days, whose work influenced some of my earliest impressions of D&D). Here is one of Rosloff’s pieces (from page 7 of the DCC RPG beta): 3. I dig the critical and fumble charts (they bring back some good memories of my MERP and Rolemaster days!). Not sure how well they would work in practice, obviously.

4. I like that magic is unpredictable, but I think that it may be too unpredictable. (The consequences for Wizards if they roll a natural '1' when casting look to be pretty dire [see pp. 97-99]. I suspect that higher-level wizards frequently will have beaks, bull’s horns, scales, gills, etc.)

1. I dislike the ‘funnel system’ for creating player characters. Apparently, players are expected to start with four 0-level PCs, which subsequently are ‘culled’ in an initial dungeon adventure. Now, it might be cool to have this as an option for beginning players, but these days I prefer to let players choose what kinds of characters they want to run.

2. There is a certain haughty 'old school machismo' tone that runs through much of the text that I find grating. (E.g., all ability scores must be rolled randomly and in order; most of your 0-level ‘peons’ will be killed in their first adventure; the brutal 'corruption' spell failure chart; etc.). The tone reminds me of the ‘grumpy old man’ character that Dana Carvey used to play on Saturday Night Live. (“Back in my day, our 0-level characters died every twenty-minutes by impaling themselves with their own pitchforks while fighting house cats – And We Liked It!”)

Based on this skim, I doubt that I'll ever play this game, but I'll likely get a copy of the core rules simply for the art. However, this is only a beta release, and I haven’t read the rules fully, so perhaps I’ll change my opinion in the future...