The Journal of Edvund Yrvim - Entry 10 - Burning Down the Inn

Bōdric, Adralat, and I returned to our room at the Frozen Gem. Our warrior-slave Myluk poured each of us a cup of cool wine. We sat in silence for a few minutes, sipping our wine and contemplating our predicament.

Then we heard a knock at our door. “This is Zherez, mates. Open up please!”

I gestured at Myluk for him to do so. Upon opening the door, however, the innkeeper and five of his henchmen burst forcefully into our room. Much to my dismay, the herbalist Auhora was with them. 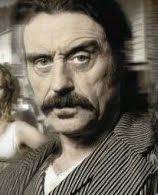 Auhora nodded meekly, gesturing at Adralat and myself. The innkeeper glared at us, his face flushed with anger.

After a moment of tense silence, Adralat suddenly blurted out, “You know, man, you’re a complete and utter arsehole.”

The innkeeper stared in amazement at the strange human. His thugs drew their crude blades, clearly intending to intimidate us.

Our charade of innocence was clearly at an end. I said as calmly as I could, “The human female Aneera, whom you have quite unjustly been keeping captive here, is now halfway en route to the Isle of the Purple Towns. So Zherez, I think that you may as well forget about her. We are willing to compensate you a few hundred silver coins, but what is done…”

Cutting me off in mid-sentence, hatred burning in his eyes, the innkeeper snarled, “Look, you Melnibonéan scum, we can do this the easy way or the hard way. The choice is yours.”

Sighing in frustration, Bōdric snapped his Melnibonéan blades out of his scabbards, and muttered grimly, “We’ll try the hard way, then, you piece of walking offal.”

And so violence broke out, yet again. The elderly herbalist prudently fled.

Initially, Zherez’s thugs batted away the blades of Adralat, Bōdric, and Myluk – and vice versa. Adralat broke this cycle, and smacked the miscreant with whom he was engaged in the head. Stunning his opponent, the dreamthief struck again, this time cleanly severing the man’s head.

Myluk, who was engaged with two brutes that had flanked him, was less fortunate. A blow to his leg left him on one knee. He deflected further blows, eventually burying his axe in the face of the Frozen Gem’s main bartender. Myluk’s other foe, however, managed to trip him, leaving our mighty warrior-slave flat on his back.

My half-brother, in the meantime, had been knocked down thanks to a massive blow to his head. While Bōdric’s steel helm prevented any serious damage, the strike had left him stunned and quite vulnerable.

While my compatriots were engaged in mêlée, I muttered my rune of Reflection, and proceeded to march up to Zheren, hoping that he would assault me. My wish was granted, and the innkeeper thrust his rapier at me, only for it to rebound at him, cutting his thigh. Shocked at this evidence of sorcery, Zherez immediately turned about and began to flee. I pursued him, but as I left the room I saw him vault over the banister onto the second floor and disappear. Apparently his wound was not deep enough to slow him. As I tried to catch up with the villain, I slipped and fell on the stairs. Fortunately, the only damage done was to my pride.

Returning to our room, I saw that Bōdric had somehow managed to extract himself from his unfortunate position, and slay his attacker as well, his dirk implanted in the corpse’s eye socket. Adralat, remarkably, seemed to have severed another thug’s head! In contrast, Myluk’s luck continued to be poor, as had suffered a gash to his forehead. Shaking blood from his eyes, our warrior-slave continued to deflect further blows from the remaining thug with his shield.

Impatiently, I uttered my rune of Sleep, placed my hand on the back of the last of Zherez’s henchmen, and thereby caused him to collapse in a sorcerous slumber.

“Not that well, I’m afraid,” I replied. “Zherez has fled, and no doubt will be returning soon with reinforcements. I’m sure he won’t be taking any chances this time. That wolf will want our blood!”

I bound Myluk’s head with some torn sheets as we discussed what to do next.

“What?” I exclaimed in reply. “How could that possibly help?”

“Well, it would keep Zherez distracted, surely, while we escape!”

Nodding, Adralat spoke up, “I agree with Bōdric. A fire would create a useful distraction. While it rages, Myluk, who is now wounded, could accompany the eleven prostitutes, the sisters of Aneera, to our ship to the north. My promise to her would thus be fulfilled. Myluk would be able to recover away from here, and we could go to Nhagren’s house and hide there until the time of the banquet.”

I spent a few moments thinking over the plan. Despite myself, I had to concede that I could think of no better alternative.

“Very well. Bōdric and I will stay here and ready this vile place for Kakatal’s burning embrace. While we do that, Adralat, you should take Myluk and the human prostitutes to the edge of the city. Once you’re beyond the city walls, I’m sure that Myluk alone can accompany the females to the cove where our ship is hidden. Once our respective jobs have been completed, we should meet up at Nhagren’s house, and hide there. It is, of course, a gamble whether that wretched Pan Tangian will give us succour. But I suppose that we have little choice in the matter.”

And so our human companion gathered the prostitutes from the inn, and departed with them and Myluk. My brother and I, in the meantime, ransacked the bar’s supply of liquor. Strangely, the patrons in the common room seemed largely oblivious to what we were doing, delighted simply by all the free ale they were enjoying during the unexplained absence of Zherez’s staff.

Bōdric and I poured the liquor throughout the various upper halls and rooms of the inn. We set fire to the top floor, and then proceeded to flee with great alacrity. As we walked down the street away from the inn, we heard shouts of alarm coming from within, as the drunken patrons realized what was happening.

People shouted as they fled, “Fire! Fire! The Gem’s ablaze!”

As flames consumed the largest inn of Ryfel, Bōdric and I met up with Adralat at Nhagen’s house. After informing us that Nhagren and Aneera were now at the Black Citadel (apparently the Pan Tangian had an apartment there), we were shown into the antechamber by Graive.

Sipping gratefully from a glass of fine wine proffered by the painfully obsequious manservant, I commented, “Well, Gentlemen, this was quite an eventful day, no?”

Alas, life was only to become even more eventful…