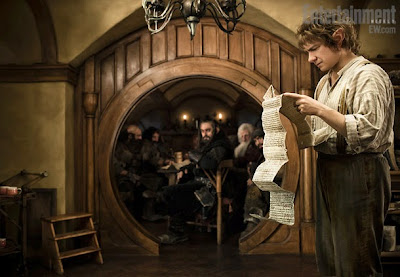 From The American Prospect:

Jackson is filming The Hobbit as a two-part prequel to The Lord of the Rings, and as such, the film will feature many of the same characters. In particular, Ian McClellan, Hugo Weaving, Cate Blanchett, Christopher Lee and Orlando Bloom, and Elijah Wood will reprise their respective roles (Gandalf, Elrond, Galadriel, Saruman, Legolas and Frodo Baggins), despite their thin or nonexistent presence in the book.

Fans of The Hobbit might cry foul at the inclusion of these characters (particularly Frodo, who isn’t even alive at the time of Bilbo’s journey), but they’re in line with J.R.R Tolkien’s stance toward his work. The Hobbit was originally written as a standalone story that took place in the mythology Tolkien had developed years earlier (and would continue to develop over the course of his life). The novel’s huge success prompted Tolkien’s publishers to ask for a sequel, which he subsequently commenced. This sequel would eventually become The Lord of the Rings, and its substantial departure from The Hobbit prompted Tolkien to make revisions to the original story, in an effort to better align the stories. Via Wikipedia, here is one prominent change made in later editions of The Hobbit:

In the first edition of The Hobbit, Gollum willingly bets his magic ring on the outcome of the riddle-game, and he and Bilbo part amicably. In the second edition edits, in order to reflect the new concept of the ring and its corrupting abilities, Tolkien made Gollum more aggressive towards Bilbo and distraught at losing the ring. The encounter ends with Gollum’s curse, “Thief! Thief, Baggins! We hates it, we hates it, we hates it forever!” This sets the stage for Gollum’s portrayal in The Lord of the Rings.

In the same vein, Peter Jackson’s additions are an attempt to add more and greater continuity between the two film series. For my part, I’m very excited to see what Jackson does with this element of Tolkien’s mythology.

That’s a pretty positive perspective (spin?) on what Jackson is doing with these two films. Nonetheless, I too am starting to get excited to see these films.