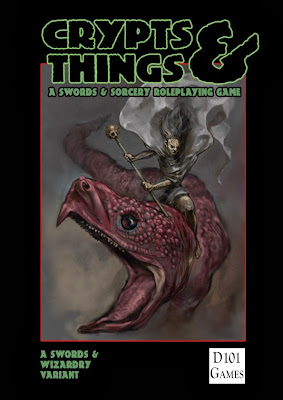 Newt Newport reports that things have been quite active over at d101 Games as of late. Exciting things are happening for OpenQuest (the d100/RuneQuest variant rules system produced by d101 Games) and Crypts and Things.

Crypts and Things, as I mentioned in an earlier post, is a darker, ‘swords and sorcery’ flavoured variant of the Swords & Wizardry game (which, in turn, is a 0e D&D ‘retro-clone). C&T draws on my ‘Akratic Wizardry’ house rules for S&W, as well as Newt’s own fertile ideas and his intriguing ‘Zarth’ world setting.

It looks like ‘external play testing’ is starting up now, so if you’re interested, drop Newt a line!

(I just finished up the third adventure of my current Call of Cthulhu campaign tonight, so it may be a good time to take a break from the 1920s and run a few Crypts and Things adventures in between our Young Kingdoms sessions!)