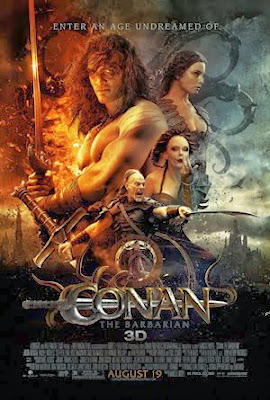 Contrary to my earlier declaration, I ended up seeing Conan the Barbarian 3D.

One of my best friends was desperate to see it, and he wanted me to see it with him, as I am one of the few fellow fans of Robert E. Howard’s stories, and even the 1982 ‘non-Howardian’ John Milius film, that he knows. He went so far as to purchase my ticket. (I protested once we got to the ticket booth, but he insisted, no doubt dreading my future grumblings should I have spent my own money on a film that I didn’t really want to see. Not that I’m cheap or anything. Really! But I do tend to grumble a lot.)

As expected, the film was rubbish. The opening scene especially was awful. Fortunately, the rest of the film was not quite as bad, and there were a few fight scenes that I rather enjoyed (such as an early one with young Conan and a Pictish raiding party, and a later one in which Conan fights a number of magically-created ‘sand demons’). But overall, the story, to the extent that there was one, was insipid, and the dialogue often groan-worthy. It was not exactly worse than I expected, but then I had very low expectations!

Also grating was the 3D. I’m not a fan of 3D in general, and very much hope that its days are numbered (or at least that it becomes standard that 2D versions become available for all films). But the 3D for this film was especially bad. I often felt like I was watching the film through a muddy lens. This is a pity, since I think that some of the vistas might have been quite impressive, had they simply been filmed normally.

In short, the 24 percent ‘freshness’ rating at Rotten Tomatoes seems pretty spot on.

Despite my low opinion of the film, though, I can’t help but feel a bit sorry for the film’s ‘script doctor’, Sean Hood, given the thoughts he expresses in this post.