It’s with some sadness that I note the approaching end of summer. I’ve been living in Toronto since January, thanks to a research grant that gave me one term of ‘teaching relief’ from my regular job ‘professing’ in Wisconsin. This enabled me to focus on writing a few academic articles.

(Why did I choose to do this in Toronto instead of Milwaukee? The main reason is that my partner, Jo-Anne, has a full-time job in Toronto. Yes, like many academics, I presently am trying to solve my own version of the ‘two-body problem’. Additional reasons for spending 8 months in Toronto include my old friends here, and the fact that I love this city, despite its warts.)

During the past eight months I’ve enjoyed some great gaming. I ran a sporadic but fun Call of Cthulhu campaign, set in 1923 Toronto. We only managed to complete three adventures (in four sessions), but I look forward to restarting it again in the future.

Of greater note is the epic Elric of Melniboné campaign that was ‘game-mastered’ by MRQII co-author Lawrence Whitaker. We met about 2-3 times per month since late January (although somewhat less frequently, unfortunately, in June and July). It was probably the greatest campaign in which I’ve ever played. Much to my relief, despite some difficult schedules over the summer, we managed to get a couple of thrilling sessions in during the last half of August, which brought the campaign to a pretty astonishing ‘holding point’. We all hope to continue the campaign, even if in order to do so we may have to play online. (Not only am I moving back to Milwaukee this week, but another player is moving to Paris in September. The gang is dispersing!)

I’m horribly far behind in the logs for both the ‘Cthulhu Canada’ and the ‘No Reason for Waking’ (Elric) campaigns. But I have good notes for both, and look forward to bringing them up to date during my gaming hiatus in September.

Since I’m about to move back to Milwaukee, and have to get ready for the autumn term, I doubt that I’ll have time to post anything new here for at least a week (possibly longer).

On an unrelated note, here is a picture of yours truly with the Wizard of Hope: 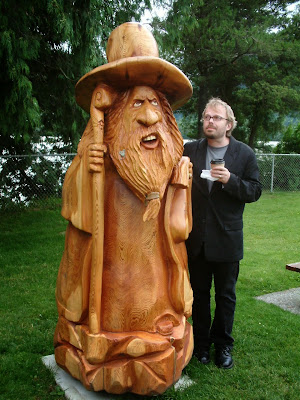 (While travelling through British Columbia during my vacation in July, Jo and I stopped in the charming town of Hope. There are numerous chainsaw woodcarvings throughout the town, and this one in particular appealed to me, for obvious reasons.)