Where in the Young Kingdoms is Nassea-Tiki? 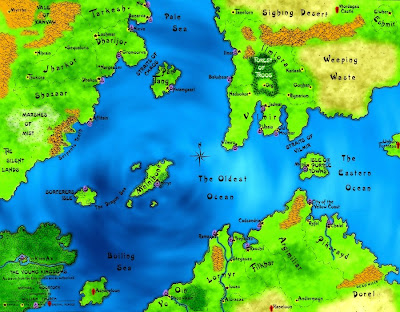 I’m reading the final ‘Elric’ story written by Michael Moorcock (well, the final one so far; hopefully we’ll get a few more!). It’s called ‘Black Petals’, and is included in the sixth volume of the recent Del Rey series of Elric tales, entitled Swords and Roses. (I’ve read the other five volumes over the past several months, and hope to summarize my impressions once I finish this one and have some time.)

The story, which was written in 2007, mentions a few places that have not been mentioned in any earlier Elric stories (to my knowledge), are not shown on any existing maps of the Young Kingdoms, and are not mentioned in the most recent RPG game based upon the series (MRQII’s ‘Elric of Melniboné, by Lawrence Whitaker).

These places include the bustling port-city of ‘Nassea-Tiki’ and the ruined city of ‘Soom’. Apparently ‘Soom’ lies upriver, deep in a jungle, from the coastal city of Nassea-Tiki. Moreover, Nassea-Tiki, while some distance from the Young Kingdoms detailed in Moorcock’s stories, clearly has extensive trade relations with those realms. Neither city, though, was ever ruled by the Bright Empire.

Since this story is so recent, I certainly cannot fault Lawrence for not including it in Elric of Melniboné (which is remarkably comprehensive). And it is obvious why Nassea-Tiki and Soom would do not appear on any maps yet produced.

I’m curious, though, as to where in the Young Kingdoms Nassea-Tiki could plausibly be located. Looking at the Young Kingdoms map, and taking into account that the city is adjacent to a jungle, and that Soom lies ‘upriver’ (inland), I have no idea!

The southwest continent looks most promising, as it’s covered with jungle. But the presence of a major port city there would seem to conflict with Moorcock’s earlier descriptions of that continent. But perhaps it should simply be ‘retconned’ there?

Finally, I should mention that I actually haven’t finished reading the story, so perhaps I’ll discover the answer soon enough…

UPDATE: I finished the story last night. A very good read, but I still have no idea where it could possibly be located...