On the Original Elric Stories

In order to get into the spirit of my current ‘Young Kingdoms’ campaign, I just reread the original five Elric short stories. They recently were published in their original form (the version that was published in Science Fantasy magazine, 1961-62) in the Del Rey collection Elric: The Stealer of Souls. 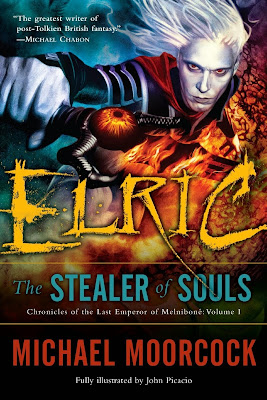 · While the Gods Laugh

· The Stealer of Souls

· The Caravan of Forgotten Dreams (originally The Flame Bringers)

I must say that I really enjoyed reading these tales again. They are briskly paced but contain surprising depth. Only around 40 pages each, they each are easily readable in a single sitting (or a single ‘lying,’ if you generally read fiction in bed, as I do).

The last time I had read an Elric tale was over 15 years ago; it was The Revenge of the Rose, if I recall correctly. I’ve always wanted to give Elric another read, but never seemed to get around to it. Last year, though, I did reread some of Michael Moorcock’s other ‘Eternal Champion’ stories, viz., both Corum trilogies, and the short novel The Silver Warriors, all of which I enjoyed very much. (‘Corum’ was my favourite ‘Eternal Champion’ when I first read many of Moorcock’s fantasy tales over 25 years ago. I think that he still is, although I find Elric more intriguing now than I did as a teenager.)

Also included in this book is Stormbringer, specifically, the four original novelettes that were published in Science Fantasy 1963-64. I’ve finished the first novelette (Dead God’s Homecoming) and am well into the second (Black Sword’s Brothers). While I’m enjoying these tales well enough, I decidedly prefer the earlier five. Those earlier stories have a certain élan that the Stormbringer novelettes lack. The latter stories seem ponderously ‘epic’ in tone.

Right now, I wish that all of the Elric stories were like the original five. Dark fantasy tales, most definitely, but relatively light on the angst and melodrama. Perhaps that sentiment will change as I read more (I already have volume two of the Del Rey series, To Rescue Tanelorn).

(Anyone else notice that the artist of the above illustration, John Picacio, stuck the ‘Eye of Sauron’ onto the hilt of Stormbringer?)