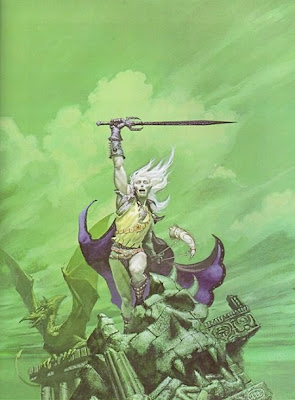 As I mentioned last Saturday, it looks like I’ll be a player in a ‘Young Kingdoms’ campaign in the very near future. We’ll be using the (Mongoose) RuneQuest II system with the Elric of Melniboné supplements.

I’ve been mulling over a couple of character concepts for the campaign (which will take place about a century before the Elric saga):

· A Half-Melnibonean sorcerer. As the half-breed bastard of a Melnibonean sorcerer and an Ilmiorian slave, the character has no place within traditional Melnibonean society, and so has absconded (perhaps with one on his hated father’s minor grimoires) to the Young Kingdoms in order to find his fortune.

· A scrutineer (a kind of astronomer/astrologer) from Elwher, who studies and follows the Elithior (the constellation gods of the Eshmir). His patron deity is Angharand, the Chariot (god of travelers). Over a year ago, he received a ‘vision’ in a dream from Angharand, instructing him that his fate lay in the Young Kingdoms to the west. After a long journey (astrolabe and telescope in tow), he is ready for adventure!

Perhaps some other possibility will occur to me before we create characters on Tuesday. It should be a nice change from being a GM!